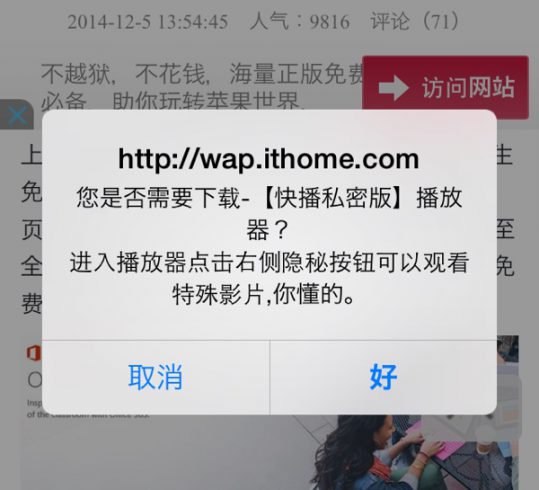 Experts at Paloalto Networks discovered a strain of Apple iOS malware dubbed YiSpecter that is able to infect both jailbroken and non-jailbroken devices.

The recent XCodeGhost attack suffered by Apple demonstrated that nobody is completely secure from malware-based attacks. Now security researchers at PaloAlto Networks have discovered a new malware dubbed YiSpecter that they sustain is able to compromise both jailbroken as well as non-jailbroken iOS devices.

YiSpecter has been abusing private APIs and enterprise certificates to infect any iOs device.

“Whether an iPhone is jailbroken or not, the malware can be successfully downloaded and installed,” states the blog post published by PaloAlto Network. “Even if you manually delete, it will automatically re-appear.”

The new YiSpecter threat targets Apple’s iOS users in China and Taiwan, but at the time I’m writing there are no news on the number of infected devices.

Once infected the iOS mobile device is it able to perform the following actions:

Dubbed YiSpecter, the malware infects iOS devices and once infected, YiSpecter can:

“YiSpecter consists of four different components that are signed with enterprise certificates. By abusing private APIs, these components download and install each other from a command and control (C2) server. Three of the malicious components use tricks to hide their icons from iOS’s SpringBoard, which prevents the user from finding and deleting them. The components also use the same name and logos of system apps to trick iOS power users.”

How to Remove YiSpecter from Your iOS Devices?

Experts at PaloAlto network provided the following instructions to remove YiSpecter from the infected device:

Security experts from PaloAlto Networks have reported the security issue related to the YiSpecter malware to Apple, which is investigating it.