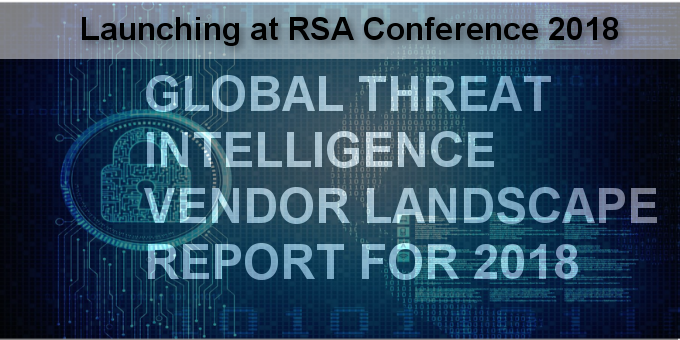 Cyber Defense Magazine will be releasing our first Quarterly Vendor Landscape report at the RSA Conference 2018.  Each quarter we will cover a different major INFOSEC topic, showing the market leadership, from our perspective, in various important PROACTIVE INFOSEC market sectors.  We’ll cover the globe and share our findings in a concise report.

At RSA Conference 2018, not only will we be releasing our coveted annual PRINT edition of our magazine but also this very important marketplace report.

The integration of Threat Intelligence techniques into a broader cybersecurity strategy is a natural development in the escalating battle between cyber criminals and the defending team.  In today’s environment, it does seem strange that there still appears to be resistance to the cost or even the ethics of applying intelligence methods to counter threats to the information systems on which so much depends.

There was a time when conducting intelligence activities, or “spying,” was considered unacceptable.  The admonition “Gentlemen do not read each other’s mail,” was the rule of the civilized world.  But we no longer have the luxury of ignoring available information on the cyber threats to our critical infrastructure, business operations, and even humanitarian aid.

It’s clear that violence against the cyber perpetrators is not the answer, nor is vigilantism, since these “self-help” remedies only serve to undermine the values of civilization.

Many effective methods have been developed to minimize the adverse effects of cyber exploits, such as redundant systems, enhanced security protocols, and remediation plans.

However, there is no defense more important or effective than stopping an attack before it can occur.  That is what Threat Intelligence is all about.  And the magnitude of the intelligence effort must equal or exceed the threat in order to protect against harm.

How big is the threat?  Of course, it is difficult to quantify; but three things seem clear:

That said, there are some indicators worth noting for the purpose of scoping out the magnitude of cyber threats and integrating that intelligence into an effective cyber defense system.   Best Threat Intel players determine, very rapidly, Indicators of Compromise (IOCs) and share this with their client base to help get one step ahead of the coming threat – something outbreaking somewhere else is bound to hit you at some point in time.  There’s so much more to learn about the Threat Intel Vendor Market Landscape so stay tuned for our upcoming report.  When it’s online, we’ll post the link right away in the coming weeks, most likely on or about April 16, 2018.