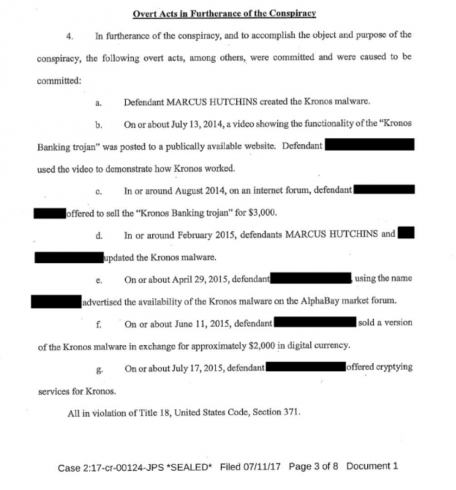 Yesterday the judge approved to release the researcher Marcus Hutchins on bail for a bond of $30,000 under certain conditions.

Marcus Hutchins, also known as MalwareTech, is the 22-year-old security expert who made the headlines after discovering the “kill switch” that halted the outbreak of the WannaCry ransomware. Marcus Hutchins has been arrested in in Las Vegas after attending the Def Con hacking conference and was detained by the FBI in the state of Nevada.

The British security researcher was arrested on Thursday after being indicted on charges of creating the Kronos banking malware.

According to the investigators, Marcus Hutchins created the malware and shared it online, below the indictment issued by Eastern District of Wisconsin.

The prosecutors believe Hutchins created, shared, and masterminded the Kronos banking Trojan between July 2014 and July 2015.

On Friday, at 3pm Pacific Time, the young malware expert appeared before a judge, pleaded not guilty to the charges against him. The judge approved to release the researcher on bail for a bond of $30,000 under certain conditions.

MalwareTech is prohibited from accessing the Internet, he must wear a GPS tracker, and he cannot contact the unnamed co-defendant mentioned in the FBI’s indictment.

Unfortunately, even though that hearing finished at 3.30pm, Hutchins was not able to get to the bail office in time as it closes at 4pm, so he will spend the weekend in jail.

On Tuesday he will appear before a judge in Wisconsin for his next court appearance.

“He’s dedicated his life to researching malware and not trying to harm people,” said one of Hutchins attorneys, Adrian Lobo. “Using the internet for good is what he’s done.”

Lobo explained to the journalists that Hutchins was able to raise bail money from his supporters.

The US Department of Justice prosecutors mentioned a recent trip of the expert to a gun range as proof that he should be denied bail and kept in jail. Lobo defined the prosecution’s proposal as “garbage”.

Hutchins’ lawyers clarified the expert is not in any way behind the Kronos banking Trojan.

Below the Lobo’s statements (courtesy of News3LV reporter Christy Wilcox).

How Cyber Insurance Can Protect Your Business from Breach of Privacy Claims Russian government claims to have dismantled REvil ransomware gang Cyber Threats Driving Insurance Claims Activity Malware Evasion Techniques Endpoint Malware and Ransomware Volume Already Exceeded 2020 Totals by the End of Q3 2021 Security and Remote Management: What Is the Market Looking Like as We Head Towards 2021? AbstractEmu, a new Android malware with rooting capabilities Maximizing the Impact of AI/ML Threat Detection Tools
August 7, 2017