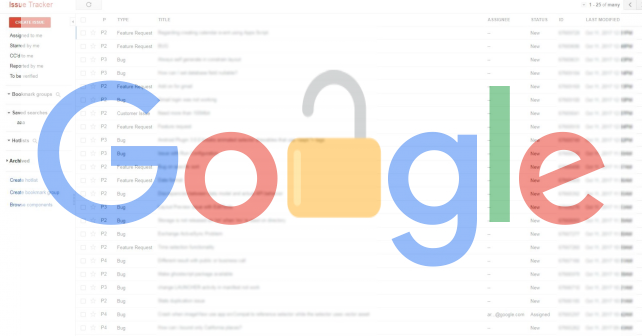 A flaw in the Google Issue Tracker, also known as the “Buganizer,” might have exposed details about unpatched flaws listed in the database.

A vulnerability in the Google Issue Tracker, also known as the “Buganizer,” might have exposed details about unpatched flaws listed in the database.

The flaw was reported by the bug hunter Alex Birsan who was awarded more than $15,000 in bounties for reporting this issue and two other vulnerabilities in the Issue Tracker.

One of the flaws allowed Birsan to manipulate a request to the system that would elevate his privileges, in this way he obtained every detail about a particular vulnerability.

Even if the Google Issue Tracker is open to everyone with a Google account, most of the issues in the database can only be viewed by Google employees. The expert found a bug that could have let him view every issue in the database.

The request allowed him to access full details of any bug in the Google Issue Tracker.

“However, I noticed some oversights here that led to a huge problem:

Birsan said he provided the system a few consecutive tracking numbers to confirm the issue.

“Obviously, I could now see details about every issue in the database by simply replacing issueIds in the request above. Bingo!” said the expert.

The expert was also able to exfiltrate data about multiple tickets in a single request.

“I only tried viewing a few consecutive IDs, then attacked myself from an unrelated account to confirm the severity of this problem. Yes, I could see details about vulnerability reports, along with everything else hosted on the Buganizer. Even worse, I could exfiltrate data about multiple tickets in a single request, so monitoring all the internal activity in real time probably wouldn’t have triggered any rate limiters.” Birsan added.

Recently it was disclosed a similar incident by Microsoft, its internal bug-tracking system, a cyberespionage group stolen company vulnerabilities DB back in 2013.

The knowledge of zero-day vulnerabilities and other issues in Google products would be exploited in targeted attacks in the wild.