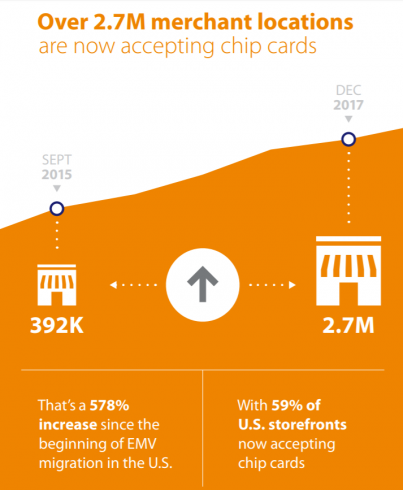 VISA – The cases of counterfeit fraud had dropped by 70% in September 2017 compared to December 2015 thanks to the diffusion of the diffusion in the storefronts of payment systems for EMV cards.

The introduction of chip-and-PIN card technology in the United States improved in a significant way, protecting the security of merchants and has reducing payment card fraud.

The cases of counterfeit fraud had dropped by 70% in September 2017 compared to December 2015 thanks to the diffusion of the diffusion in the storefronts of payment systems for EMV cards.

The process started in 2011 with the introduction of EMV (Europay, MasterCard, Visa) card technology in the United States.

The process was very slow, according to Visa, by September 2015, only roughly 392,000 merchants were accepting payment card using the new technology. at the same period, the number of Visa debit and credit cards using the EMV technology was only at 159 million.

Now Visa has shared data related to the adoption of the EMV technology by December 2017. The number of storefronts that currently accept payments with chip cars has reached 2.7 million in the U.S. (+570%), representing 59% of the total.

It is an excellent result, according to VISA Chip transactions continue to increase in the US. EMV cards accounted for 96% of the overall payment volume in the United States in December 2017, with chip payment volume reaching $78 billion.

Cybercriminals have responded to the adoption of EMV chip cards focusing their efforts on card-not-present (CNP) fraud had that is today a serious concern for merchants.