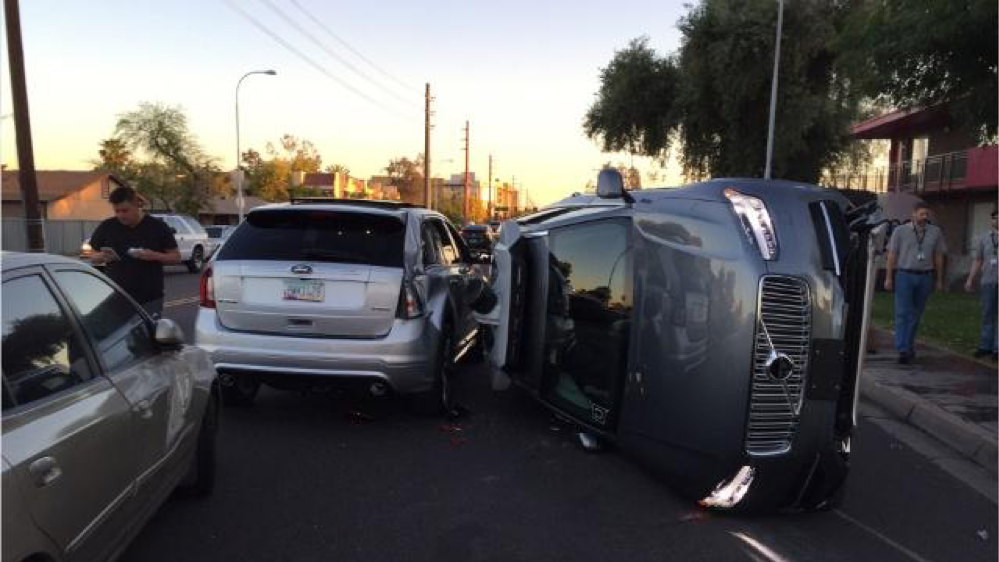 An Uber self-driving car has struck and killed a woman pedestrian in Tempe, Arizona. The incident raises questions about the safety and security of this kind of vehicles.

This is a sad page of the book of technology evolution, an Uber self-driving car has struck and killed a woman pedestrian in Tempe, Arizona.

The news was confirmed by the company, this is the first incident of this type.

Our hearts go out to the victim’s family. We’re fully cooperating with @TempePolice and local authorities as they investigate this incident.

According to the media, the accident occurred while the car, a Volvo  XC90 SUV, was in the self-driving mode.

“Tempe police are investigating a deadly crash involving a self-driving Uber vehicle overnight. The Uber vehicle was reportedly headed northbound when a woman walking outside of the crosswalk was struck.” states the TV station ABC15.

“Tempe Police says the vehicle was in autonomous mode at the time of the crash and the vehicle operator, 44-year-old Rafaela Vasquez, was also behind the wheel. No passengers were in the vehicle at the time. “

The victim Elaine Herzberg (49), the Uber self-driving car has struck the woman while she was crossing the street outside of a crosswalk.

The woman was transported to the hospital where she has died.

The company immediately suspended its service, all the self-driving cars in the US will be halted, below the message sent by the Uber CEO.

Some incredibly sad news out of Arizona. We’re thinking of the victim’s family as we work with local law enforcement to understand what happened. https://t.co/cwTCVJjEuz

Uber launched the self-driving program in 2015, its vehicles since then are circulating in many US cities, including Phoenix, Pittsburgh, San Francisco, and Toronto.

The tests in Tempe, Arizona started in February 2017.

The National Transportation Safety Board announced an investigation and sent a team to the place of the accident.

The company suspended its self-driving program and withdrew all autonomous cars from US roads.

Even if this is an accident, we cannot forget the aspect safety and security when dealing with automotive. Are we really ready to make a self-driving car on the road?

When such kind of vehicle will crowd our cities the risks will be high and the cybersecurity aspects will be crucial.