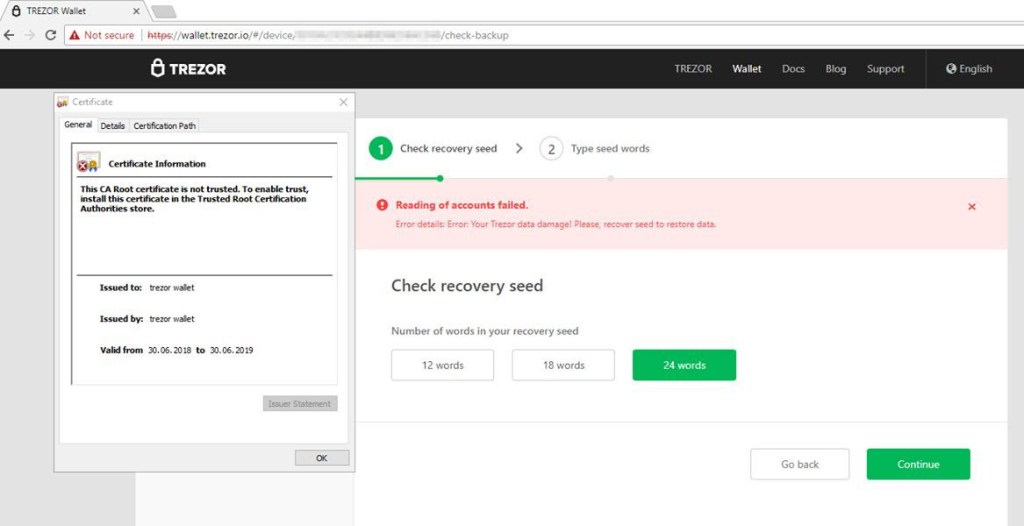 The maintainers of the Trezor multi-cryptocurrency wallet service reported a phishing attack against some of its users that occurred during the weekend.

I had some issues yesterday, when accessing your site. It seems to be related with DNS. Is https://t.co/wGje8x5lRN legit?

The attack appears more complex respect a simple phishing campaign, hackers may have powered a DNS poisoning attack or a BGP hijacking to redirect users to a rogue phishing site that mimic the legitimate one.

Hackers redirected legitimate traffic for the official wallet.trezor.io domain to a rogue copy of the website.

The team launched an investigation to shed the light on the attack. The experts spotted the incident after users reported HTTPS certificate error while landing on web wallet portal.

The error alerted the users, this kind of error suggests users are visiting a rogue website that attempts to pose as a legitimate one.

“Late night yesterday, our Support Team started receiving inquiries about an invalid SSL certificate, which serves as a stamp of authenticity of our web services. This can happen for a few reasons, some of which are less serious. Unfortunately, after investigating these reports closer, we found out that the invalid certificate warning appeared because of phishing attempts against Trezor users.” reads the security advisory.

“The fake Trezor Wallet website was served to some users who attempted to access wallet.trezor.io — the legitimate address. We do not yet know which attack vector was used, but the signs point toward DNS poisoning or BGP hijacking.”

The company also reported two other issues for the bogus website:

The company took down the malicious website with the support of the hosting provider.

"At this moment, the fake Wallet has been taken down by the hosting provider. However, you should remain vigilant and report all suspicious sites. It is possible that this attack method will be used repeatedly in the future."https://t.co/qe9jIwxBGQ

At the time it is not clear if the attackers stole user funds.

Let’s close with suggestions provided by the company:

So how should I recognize the original Trezor Wallet?