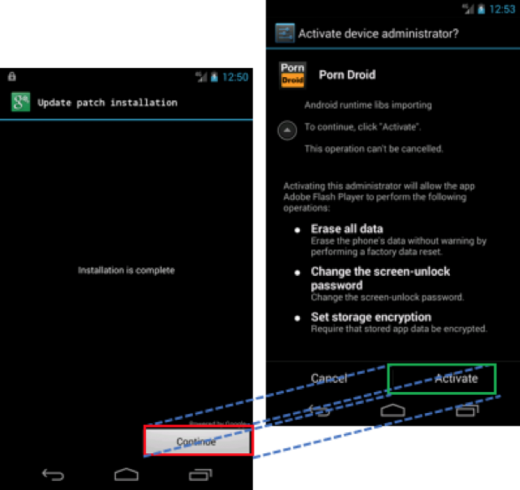 Toast Overlay attacks, a Cloak and Dagger with No Permissions, fixed by Google

The experts reported that it is possible to abuse Android’s toast notification, a feature that is used to provide feedback about an operation in a small short-lived pop up notification, to obtain admin rights on targeted phones and take over the device.

The vulnerability affects all versions of the Android operating system prior to the latest Android 8.0, (Oreo), nearly all Android users.

“What our researchers have found is a vulnerability that can be used to more easily enable an “overlay attack,” a type of attack that is already known on the Android platform. This type of attack is most likely to be used to get malicious software on the user’s Android device.” reads the analysis published by Palo Alto Networks. “This type of attack can also be used to give malicious software total control over the device. In a worst-case attack scenario, this vulnerability could be used to render the phone unusable (i.e., a “brick”) or to install any kind of malware including (but not limited to) ransomware or information stealers. In simplest terms, this vulnerability could be used to take control of devices, lock devices and steal information after it is attacked.”

The toast attack is exploitable for “overlay” attacks on Android phones, attackers use them to create a UI overlay to be displayed on top of legitimate Android applications and trick victims into providing sensitive information or clicking confirmation buttons.

The overlay attack can also be exploited to trigger a denial-of-service condition by creating a toast window that overlays an entire screen of the mobile device.

A toast-type overlay is similar to the Cloak and Dagger attack method that was discovered earlier this year.

“Cloak & Dagger is a new class of potential attacks affecting Android devices. These attacks allow a malicious app to completely control the UI feedback loop and take over the device — without giving the user a chance to notice the malicious activity. These attacks only require two permissions that, in case the app is installed from the Play Store, the user does not need to explicitly grant and for which she is not even notified. Our user study indicates that these attacks are practical. These attacks affect all recent versions of Android (including the latest version, Android 7.1.2), and they are yet to be fixed.” states the researchers.

The Toast overlay attacks are quite similar but do not require specific Android permissions to be granted by users.

“Overlay attacks permit an attacker to draw on top of other windows and apps running on the affected device. To launch such an attack, malware normally needs to request the “draw on top” permission” reads the analysis from PaloAlto Networks.

“This newly discovered overlay attack does not require any specific permissions or conditions to be effective. Malware launching this attack does not need to possess the overlay permission or to be installed from Google Play. With this new overlay attack, malware can entice users to enable the Android Accessibility Service and grant the Device Administrator privilege or perform other dangerous actions,”