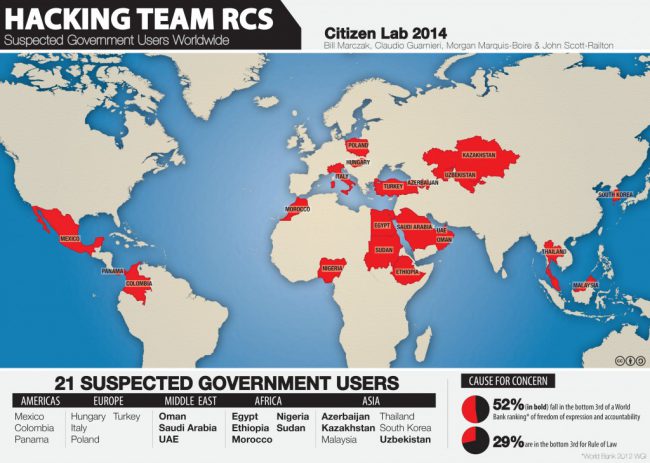 The surveillance firm Hacking Team is back stronger than before

Motherboard has obtained a non-public email sent by the Hacking Team CEO to its customers that announce a new generation of hacking tools.

Hacking Team is the popular surveillance company that suffered a serious data breach this year. More than 400 GB of its sensitive data were exfiltrated from the Italian company, including internal emails, zero-day exploits, surveillance tools, source code for the Remote Control System (RCS) spyware and a spreadsheet listing government clients.

The company has resumed its operations and as expected by the experts started is working with a new set of tools for its arsenal.

Among the numerous clients of the Hacking Team, there are several US law enforcement and intelligence agencies.

News of the day is that the company is offering to its clients Encryption Cracking Tools to circumvent the Internet encryption.

The news was reported by Motherboard that obtained  a copy of a non-public email sent by the CEO David Vincenzetti to a mailing list made of potential and current customers on October 19.

“Most [law enforcement agencies] in the US and abroad will become ‘blind,’ they will ‘go dark:’ they will be simply be [sic] unable to fight vicious phenomena such as terrorism,” states the email sent by the Hacking Team’s CEO David Vincenzetti. “Only the private companies can help here, we are one of them.” “It is crystal clear that the present American administration does not have the stomach to oppose the American IT conglomerates and to approve unpopularly, yet totally necessary, regulations,”

Following the data breach, the Hacking Team went into “full on emergency mode,” asking its customers to shut off their surveillance systems.

Vincenzetti announced in the email message a totally new cyber arsenal, he defined its new tools as game changers,

Motherboard mentions a totally new RCS version, RCS 10, a powerful tool that is able to load a number zero-day exploits designed by the experts of the company.