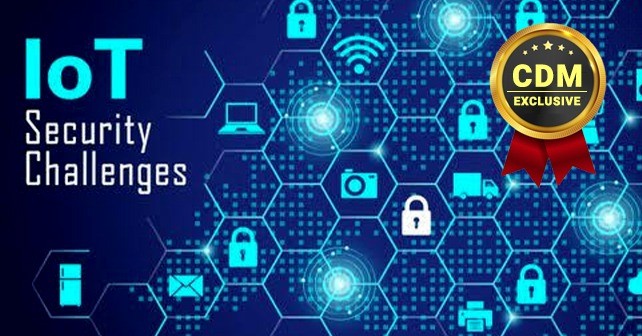 The security’s challenges of an Internet of Things

The Internet of Things (IoT) is not that new concept beginning with these days. It’s more like the name of the current state being correlated with technological progress and development. This new paradigm is closely linked with many smart solutions using the Internet to communicate with each other. The main challenge with this sort of advancements is their security.

The open question here would be if we could make these sophisticated solutions being securer using the better link cryptography, communication protocols or end-to-end encryption. Through this article, we would attempt to discuss some of these ideas as well as provide a deep insight into how this sort of technological achievements could offer a stronger defense.

The IoT as a paradigm of today
The IoT is quite interesting and exciting topic attracting attention worldwide. The developed societies could not imagine their smart solutions without this sort of communication, while people from a developing world could meet these solutions from time to time.

The IoT is not a new concept, it’s just the consequence of technological development and progress running at a quite fast pace. Simply, today’s mechatronics devices being connected with each other using Internet communications are called the IoT paradigm.

Beginning with the robotized industrial assets over smart cars until intelligent printing equipment – all of those would represent the IoT solutions. It’s simply about many mechanical, electrical, electronic and software elements being correlated with each other to communicate through the Internet being wired or wireless.

So, what’s the biggest challenge to this infrastructure? Someone would say it’s its robustness, but we would suggest it’s perfectly packed for its needs. The IoT systems are not bigger than any other technology obtaining that role is. Finally, we would come to the ultimate challenge to this technology and that is its security. As we would previously mention – these systems would get driven using the Internet communications being wired or wireless which would indicate many vulnerabilities to the external malware applications.
The typical IoT would rely on so many mechanical, electronic, electrical parts, sensors, measuring elements and actuating systems that would use some power supply and obtain the communications using the Internet signal.

Such communication could be wired or wireless, so it’s necessary to deal with the good encryption and let’s say – strong passwords.

As it’s illustrated through the Figure above, the same Internet would be used to maintain communications over many different devices using that network to deal with each other. We would figure out here that such openness to the web would make some weaknesses to that technology making it sensitive to hacker’s attacks.

It’s quite clear how risky it would be if any of smart devices being the part of the IoT’s network would start behaving in a harmful manner and how such an occurrence could get threatening to humans.

The purpose of this effort is to clarify the importance of an IoT’s paradigm as well as explain how threatening to its security could be the fact suggesting it relies on Internet communication. Also, it’s quite obvious that if there is no Internet signal, these systems may appear as quite useless and that could happen through carefully coordinated DDoS attacks.

The security’s challenges of an IoT
Many robotized industrial assets and intelligent computing systems could use the wired web connections to maintain the communication between those assets and centralized computing unit, while mobile systems such as cars would not pull the bunches of wires with themselves trying to maintain the communication with their remote station – they would simply rely on the wireless solutions.

Anyhow, all of these would be quite risky to the entire system making it vulnerable to all known hacker’s attacks and cyber incidents. It appears that this new level of sophistication would just make things being more complicated.

In other words, as it’s convenient to use these cutting edge systems – it can be the real nightmare if any of these technological solutions would collapse. So, what’s significant to point out here would be that these systems are so similar as anything relying on the Internet.

Practically, all the concerns happening with your computer getting the Internet connection may appear with the IoT solution as well, while those consequences could be quite serious to its users.

For instance, your smart and intelligent systems could begin dealing in a quite unintelligent way causing damage or much worse putting you at the risk while you are in a motion using some of your mobile systems.

The securer IoT – The safer experience to all
Finally, the imperative with the IoT would be to make it securer. This is especially important from the consumer’s point of view because the securer IoT would offer him a much safer experience. In other words, it’s so significant to research and development teams to work very hard in order to produce securer IoT solutions bringing us a much safer experience.
No one of us would wish to be the victim of some accident, so everybody would appeal to the industry’s experts to develop something being reliable and trustworthy at the same glance. We would not need the victims of modern technology offering us a lot, but at the same time scaring us with its possible worse case scenarios. So, we hope that the coming solutions would much more careful about the security and offer us much safer usage of their capacities.

What could we expect the next?
What it would be expected the next are securer solutions relying on the IoT technology. So, what we would forecast it may happen in the future is a security-oriented IoT system. This sort of innovation could offer us much safer experiences in the sense of using such sophisticated technology as well as a better balance between the threats and defense. In conclusion, the ultimate goal to the future times would be a securer IoT providing us less fear about our safety.