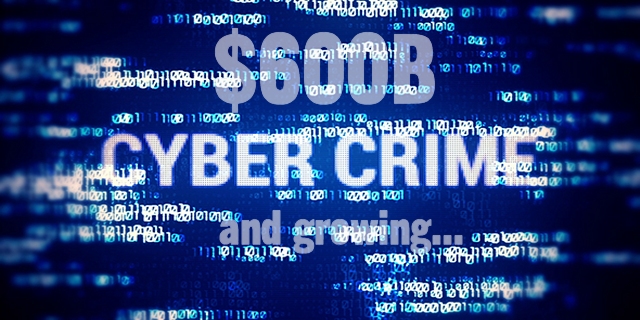 The Global cost of cybercrime jumped up to $600 Billion

The tech giants McAfee and Cisco published two reports that providers further info about the global impact of cybercrime.

Which is the cost of cybercrime? It is hard to provide an effective and good estimation of the overall impact of the numerous phenomena that happen every day, including cyber attacks, data breaches, scams and so on.

However, the tech giants McAfee and Cisco published two reports that provides further information about the global impact of cybercrime.

According to the report that was written by McAfee in collaboration with the Center for Strategic and International Studies (CSIS), the global cost is estimated at $600 billion annually, a disconcerting figure that corresponds to 0.8% of the global GDP. The value has jumped from  $500 billion in 2014 to $600 billion (+20%).

The cost of cyber-crime is distributed among all the countries of the world, no one is immune. The report shows variations by region, that are linked to income levels and level of cyber security maturity.  Interestingly and what may seem obvious, the countries with greater losses are the richest ones.

According to the report, Russia leads cyber-crime activities worldwide, the reports also highlighted the thin line between crime rings and nation-state actors.

“CSIS believes that Russia leads overall in cybercrime, reflecting the skill of its hacker community and its disdain for western law enforcement. The complex and close relationship between the Russian state and Russian organized crime means that Russia provides a sanctuary for the most advanced cybercriminals, whose attention focuses on the financial sector.” continues the report.

Ransomware is a very profitable business for the criminal ecosystem.  Currently, more than 6,000 black marketplaces offer for sale such kind of malware and related services, an overall offer of more than 45,000 different products.

The second report published by Cisco confirmed the worrisome trends for cybercrime activities, the document is based on interviews with 3,600 CISOs. According to Cisco almost any attack will cost to the victims at least $500,000. The cost dramatically increased for 8% of the companies in the Cisco report as they admitted that cyber attacks had cost them over $5 million, while 11% the companies suffered economic losses between $2.5 million and $4.9 million.

Cisco highlighted the risk of attacks aimed to the supply chain of the companies. These attacks have increased in complexity and frequency.

Let me suggest reading both studies – by McAfee and Cisco, as they offer an interesting analysis of the cyber criminal ecosystem and of the overall cost of cyber-crime.