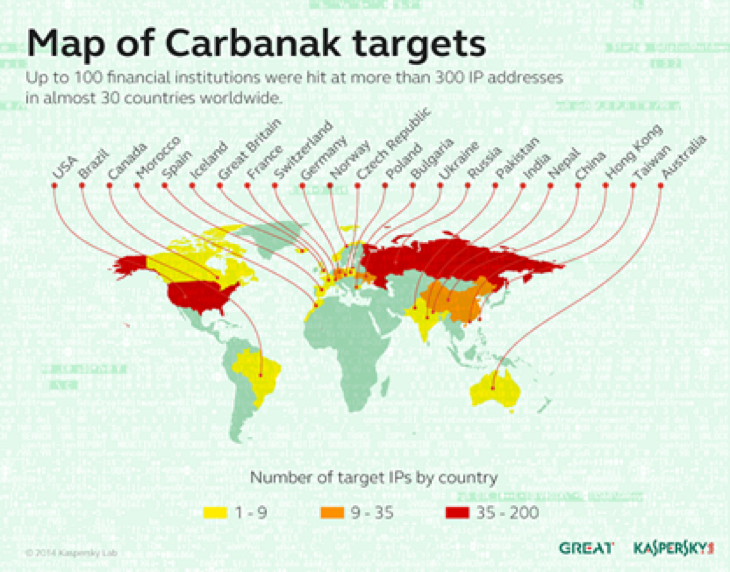 The infamous Carbanak cybercrime gang is back and is leveraging Google services for command-and-control of its malicious codes.

The dreaded Carbanak cybercrime gang is back and is adopting a new tactic for its attacks, it is leveraging Google services for command-and-control of its malware.

The criminal organization is named Carbanak cybergang because of the name of the malware they used to compromise computers at banks and other financial institutions, experts estimated that the hackers swiped over $1 Billion from their victims.

The majority of financial institutions victims of the gang are located in Russia, but many other attacks have been detected in other countries, including Japan, Europe and in the United States.

The investigators discovered that the “Carbanak cybergang” hit more than 100 financial institutions in 30 countries, it has been active at least since 2013 and there are strong indications that it may still be ongoing.

The attack vector is a trojanized RTF document with an encoded Visual Basic script that is spread via email.

“Forcepoint Security Labs™ recently investigated a trojanized RTF document which we tied to the Carbank criminal gang. The document contains an encoded Visual Basic Script (VBScript) typical of previous Carbanak malware. Recent samples of the malware have now included the ability to use Google services for command-and-control (C&C) communication. We have notified Google of the abuse and are working with them to share additional information.” reads the analysis published by Forcepoint.

“For each infected user a unique Google Sheets spreadsheet is dynamically created in order to manage each victim. The use of a legitimate third party service like this one gives the attacker the ability to hide in plain sight,” Forcepoint wrote in a blog post today.

The crooks used the “ggldr” script to send and receive commands to and from Google Apps Script, Google Sheets, and Google Forms services.

Hackers used to create a unique Google Sheets spreadsheet for each infected user, in this way they attempted to avoid detection.

“The use of a legitimate third party service like this one gives the attacker the ability to hide in plain sight. It is unlikely that these hosted Google services are blocked by default in an organization, so it is more likely that the attacker will establish a C&C channel successfully.” states the report.

The following diagram describes the way the Carbanak cybercrime gang exploited the Google Services as C&C.

Once infected the victim’s machine, the malware first attempt to contact the hard-coded Google Apps Script URL with the user’s unique infection ID. Because no spreadsheet currently exists for the specific victim, the malware will then send two requests to another hard-coded Google Forms URL which will result in the creation of unique Google Sheets spreadsheet and Google Form IDs for the victim.

The second time the Google Apps Script is requested by the malicious code, the C&C will return the unique Google Sheet and Google Form ID values.

“The “entry” value is also a unique ID which is sent with each subsequent Google Forms C&C request.”

Let me suggest to read the report that also includes the IoCs for this specific threat.