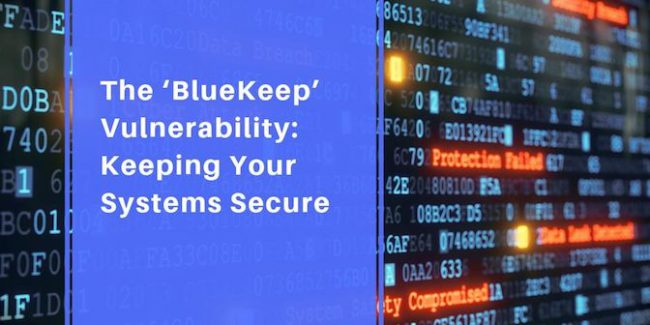 1Microsoft TechNet announcement about the patch for fixing CVE-2019-0708

Microsoft was quick to release the patch and is putting major efforts in to making sure their customers patch their systems. The severity of this vulnerability drove Microsoft to take the unusual step of issuing patches not only for current affected systems like Windows 10, Windows 7, Windows Server 2016, and Windows Server 2008 R2, but also for systems that are no longer supported like Windows 2003, Windows XP, and Windows Vista. Microsoft security officials say they are confident BlueKeep exploits already exist and may have the potential to trigger self-replicating attacks as destructive as the 2017 WannaCry attack that shut down computers all over the world.

While applying this patch is of paramount importance, patching all servers in an organization can be a very difficult tasks for enterprises. It’s important to remember that even a single unpatched endpoint can enable a breach. Evidently, the EternalBlue vulnerability was exploited on a massive scale well after the patch was released by Microsoft.

Partial exploits have already been released for the BlueKeep vulnerability, so it is just a matter of time before the vulnerability is widely used by attackers.

Protecting Your Systems from the BlueKeep vulnerability:

The first thing you should do is identify any unpatched or old operating systems in your networkand patch allaffected systems – this should be done as soon as possible!

Next, you should useNetwork Level Authentication(NLA) where possible: NLA requires authentication before the vulnerability can be triggered. Microsoft strongly recommends this, yet it isn’t the default setting.

2Enabling NLA to require authentication before the vulnerability can be triggered

Enabling NLA prevents pre-authentication execution. However, it’s important to remember that affected systems are still vulnerable to Remote Code Execution (RCE) exploitation if the attacker has valid credentials that can be used to successfully authenticate.

As mentioned above, enabling NLA is critical for preventing the pre-authentication execution, but it’s not enough because if an attacker already has valid credentials (which are quite easy to get these days), the attacker and still gain access and exploit the RCE vulnerability. This is where Silverfort comes in and prevents the use of compromised credentials for RCE exploitation and other remote desktop protocol attacks:

Silverfort’s agentless, proxyless authentication platform can enforce multi-factor authentication (MFA) and strong authentication policies to prevent unauthorized access to any system, no matter what it is or where it is – whether on-premises or in the cloud. This includes systems that couldn’t be protected by MFA solutions until today, like IT infrastructure, homegrown and legacy applications, file shares, databases, and more.

Silverfort can apply static MFA policiesthat require users to authenticate with a 2ndfactor any time they access systems, but that can be quite disruptive. Therefore, risk-based adaptive policies are highly recommended: Adaptive policies can be set to require a 2ndauthentication factor only when risk levels are high – this helps minimize disruptions without compromising security.

Service accounts are used by various corporate systems to communicate with other systems and automate processes. Such accounts are a prime target for attackers, since they are often equipped with high privileges and their passwords are rarely changed. But because these accounts are used by machines, rather than humans, they cannot be protected with regular multi-factor authentication methods.

Silverfort introduces a unique capability for securing the use of service accounts, which prevents unauthorized entities from stealing or misusing them. This is achieved without any change to the relevant systems.

Silverfort enables organizations to implement a holistic zero-trust security model without deploying software agents or proxies, and without requiring changes to existing networks. Its innovative architecture ensures secure access to any system, no matter where it is, or what it is. This includes user-to-machine and machine-to-machine access, as well as any administrative access. Because Silverfort avoids any modifications to existing assets and infrastructure, it allows not only small agile companies but also large traditional enterprises to achieve zero trust security throughout their networks.

Want to learn more or see a demo? – Contact us today!

Keeping Health Records Safe from Cyber Criminals Vulnerability Patching: Why Does It Fall Short So Often? Housekeeping Pitfalls of Vulnerability Management Microsoft Support Diagnostic Tool Vulnerability: What to Learn from It and How to Stay Safe The Cost of a Siloed Response: How a Lack of Collaboration is Becoming Security’s Biggest Vulnerability SAP systems are targeted within 72 hours after updates are released New evolving Abcbot DDoS botnet targets Linux systems Cybersecurity Alone Is Not Enough, Systems Need Cyber Resiliency
June 5, 2019