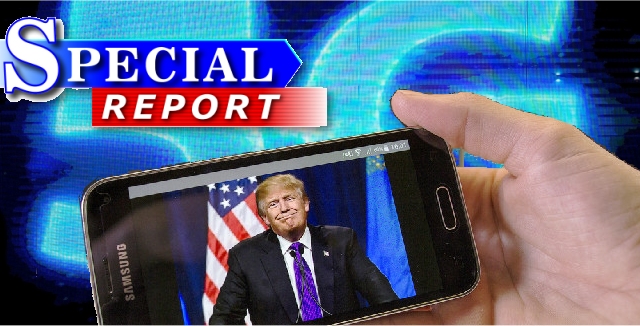 Special Report: 5G Nationalization or Not?

Rumors that the Trump Administration are going to Nationalize 5G and takeover all cell towers in America are completely preposterous.  We always hear, lately, anonymous sources say… [fill in rumor here] but let’s get into the exciting improvements 5G will bring to America and how I predict it really will unfold.

First, the story goes that Brigadier General Spalding allegedly was promoting the idea that, to keep up with the Chinese, whose government in their own country has federalized just about everything – from major highways to internet service providing and strong censorship controls on their media – it’s time America took on this project in the spirit of the 1950’s superhighway plan, where it made sense for the Federal government to step in and speed along Nationwide transportation improvements with superhighways.  However, whether he really made this proposal or not, our FCC chairman has stated repeatedly that he is against the Nationalization of 5G:

But step back a moment, who actually is running the country?  President Trump.

Where did he come from?  @realDonaldTrump He is a deal-maker and a business man through and through.  Just as he pushed for Apple and others to bring their manufacturing plants back to America, he didn’t threaten to have the US Government build all of our smartphones, did he?  Of course not.  He has been creating incentives such as huge tax breaks to attract the repatriation into America of money and jobs.  President Trump @POTUS wants to see more jobs created and the economy re-sparked for the long haul.

5G will NOT be Nationalized – Purely a Commercially Explosive Growth Effort

The transition of 4G to 5G will allow, for the very first time ever in our history, wireless technology to surpass three key technical thresholds – kind of like breaking the sound barrier for the first time:

This will have a serious negative impact on Cable providers who will have to innovate or be known as the dinosaurs of the early generation of the internet only to fossilize and fade away – but have no fear, they are flush with cash and all it takes is a few bright ideas – just think of what Netflix did to the brick and mortar blockbuster and retail video rental market.

5G will bring a wealth of new businesses and another kind of dotcom boom – there’s no way a businessman like President Trump is going to Nationalize this and ruin these huge business opportunities and innovations.  In fact, just the thought of it being Nationalized has caused REITs who privately own cellular tower land to have a spike in their stock prices.  Just keep an eye on cellular tower REITs Crown Castle and American Tower in the coming years (predictions are a spike from 2019 to 2025 but I am not one to make any stock recommendations and I disclaim all related advice).

Expect to see providers spending billions to upgrade their equipment and yes, all 4 of the major US wireless carriers, including AT&T, Verizon, T-Mobile and Spring have already started investing in and testing 5G systems in the 28 GHz and 39 GHz bands which the FCC authorized for them in 2016.  This just confirms my belief that the whole Nationalization story is just a wakeup call to shake things up and make sure all the right players are moving quickly with their investments in the future.

Don’t forget that Qualcomm has announced its first 5G modem chip called the SnapDragon X50 which was successfully tested last quarter.  They are one of the largest chip makers for cell phones so they already are on the ball when it comes to 5G.  So yes, 5G is coming and although it could take years for commercial and residential deployment across America, 2020 could be one of those inflection points in human history where we see massive adoption of these new technologies as 5G becomes a reality, here in America.

While I’m excited about the prospects, I’m also very leary about the area that the US Government should have concerns – security by design.  One of the biggest headaches in America is the exponential breaches we face.  If a Doctor will be remotely operating and needs tactile remote controls of a robotic hand for surgery, what happens if a vulnerability in that robotic system or Internet of Thing is exploited at the worst possible time?  Could a patient lose their life?  Just look at the effect of a ransomware breach – the WannaCry attack on the NHS in the UK and you’ll see that lives can be at serious risk, so when we begin to rely on faster speed transmissions, we’ll need to also rely on faster breach, vulnerability and threat detection and prevention solutions that can out-think or outmaneuver the exploiters.

5G – Security by Design and Strong Encryption a Must!

So, if our brightest minds jump into an area I call Time-based Security, where I predict that artificial intelligence, machine learning and human intelligence can all be used to speed up detection and reaction to milliseconds, then we might actually see a safer and more secure 5G world.  I would also add that strong encryption will be crucial, especially when lives are at stake – so now is the best time to demand that 5G and IoT ‘get with the program’ and think about security-by-design NOW, not when it’s already implemented to be fast but full of holes like Swiss cheese.  If we end up with Swiss Cheese, constant improvements in Deception-based Security (to slow down the breach) will also help.  This all adds up to the Time-based Security formula which I will continue to write about and speak about in the coming months.  Stay tune, we have an exciting future ahead…

Gary S. Miliefsky is the Publisher of Cyber Defense Magazine.

His bio is available here.