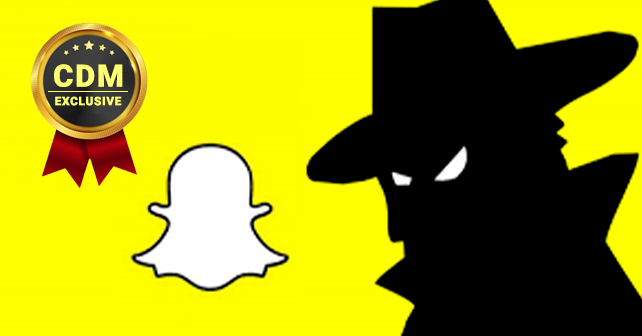 Snapchat internal staff has allegedly abused their role in the company to spy on Snapchat users using and internal tools and steal data.

Snapchat is a multimedia messaging app that makes pictures, videos, and messages (snaps) available for a short time before they become inaccessible to their recipients. Initially, it was only allowing person-to-person photo sharing, but now it also implements users’ “Stories” of 24 hours of chronological content. As of February 2018, Snapchat has 187 million daily active users.

Snapchat has internal tools that allow employees to access consumer data, and unfortunately, these tools have been abused by the internal staff.

The news was first reported by Motherboard that learned of abuses of the tools by “multiple” members to spy on users.

Current and former employees, along with a cache of internal company emails obtained by Motherboard, demonstrates the abuse of internal tools to access user data. Employees were able to access location information, personal information, including phone numbers, email addresses, and snaps.

Multiple sources and emails referred to an internal tool called SnapLion that was originally used to gather information on users in response to valid law enforcement requests (i.e. court order or subpoena).

A former employee told Motherboard that SnapLion provides “the keys to the kingdom,”

Over time the use of the SnapLion tool was extended to other departments, including security staff, and a team called “Customer Ops.”

The information obtained by Motherboard demonstrates that Snapchat failed in implementing the concept of least privilege to limit access based on what are the effective needs of members according to their jobs.

The good news is that Snapchat today implements stricter controls for data access, but it was not true in the past. Moreover, SnapLion and other internal tools did not implement a satisfactory level of logging to track what data employees accessed.

“Protecting privacy is paramount at Snap. We keep very little user data, and we have robust policies and controls to limit internal access to the data we do have. Unauthorized access of any kind is a clear violation of the company’s standards of business conduct and, if detected, results in immediate termination.” reads a spokesperson’s statement sent to Motherboard via email.