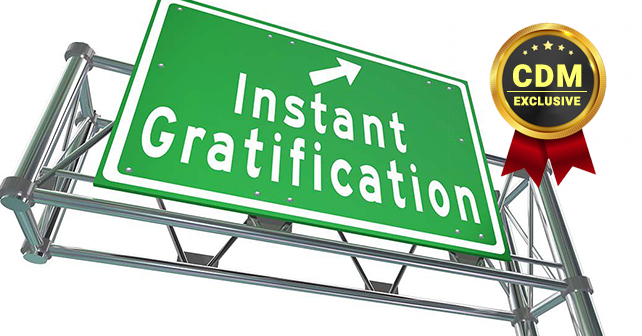 Gone are the days where one would write a letter, post it, and wait a couple of days for it to be delivered. These days people expect a message should not only be delivered to the recipient immediately, but notification should be received as soon as the recipient has opened and read it.

Connected technology has not only enabled the automation of many tasks but also greatly reduced the time needed to carry these out. The impact of this on individuals has been profound. Shopping, trading, watching a show, even hailing a cab is an almost instant experience requiring no human interaction.

But what has this done to expectations? Has it made people more impatient? Or less tolerant when things don’t go their way immediately? Let’s look at the data.

Not a cinema experience

Online video has grown in popularity over the last few years,  however,  the average attention span of viewers has gone down. According to a study by Wistia, 75% of youtube viewers will watch a 1-2 minute video to the end, however, that number drops to fewer than 60% for a video 4-5 minutes in length.

This isn’t just restricted to youtube videos. Locowise reported that on Facebook, the average video length is 55.3 seconds and the average view duration is a mere 18.2 seconds.

You probably haven’t made it this far

Written content isn’t treated much differently than video. While publishers tend to focus on the number of clicks an article or news story gets (think clickbait), it doesn’t reveal how engaged a reader is. In fact, according to Time, 55 percent spend fewer than 15 seconds actively on a  page.

OK, so where’s the risk?

Patience is a rare thing to find in the digital world. People huff and puff, and tweet horrible things if they are made to wait for what they would deem an unreasonable amount of time.

It’s this impatience or yearning for instant gratification that many scammers, fraudsters,  and online criminals prey on.

Phishing emails use such tactics all the time, “Click here to see these shocking photos of the latest Tesla before it gets pulled” or “Make your machine run faster”.

But it extends further to that. When the latest Marvel summer blockbuster comes out, criminals look to put fake malware-ridden movie downloads online.

Similarly, we see the pre-release of malicious mobile apps in gaming stores which entice users to be among the first to get a game.

I came here to detect threats and educate users

Humans, unlike machines, can get impatient, be enticed or have a bad day where they are not paying attention. It is why phishing remains a popular tactic of attackers – and is why it is impossible to ensure users won’t fall for phishing attacks all the time.

But relying on users isn’t the end goal. Security in an organization should be architected with layers that take into consideration the weaknesses within humans, and technology. Therefore, threat detection controls should be deployed so that if a phishing attempt is successful, administrators can be notified in time and take appropriate action.

Corporate users and the public at large need to be continually educated and made aware of the relevant digital risks and dangers they face.

Javvad Malik is a security advocate at alienvault and a London-based IT security professional. Prior to joining alienvault, Javvad was a senior analyst with 451 Research providing technology vendors, investors and end users with strategic advisory services, including competitive research and go-to-market positioning. He can be reached on Twitter, youtube or through his website or alienvault’s website.