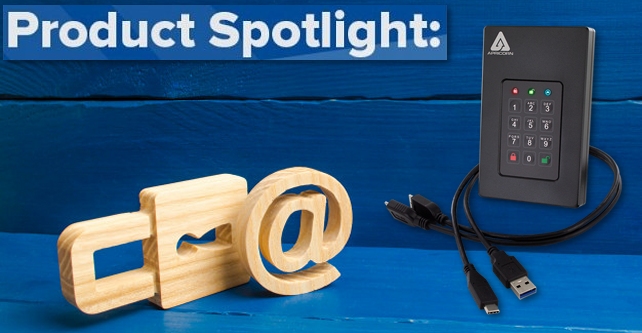 If you know me by now, I am a huge proponent of strong encryption everywhere.  That’s why I love companies like http://www.securechannels.com who have invented quantum-proof encryption.  Or why I have been so positive about the Simon and Speck offering by the NSA.gov as detailed here: https://csrc.nist.gov/csrc/media/events/lightweight-cryptography-workshop-2015/documents/papers/session1-shors-paper.pdf

So, when the Aegis Fortress L3 arrived, I was thrilled to get my hands on it.

Apricorn has done a phenomenal job at building an ultra-rugged, super-fast hardware-based encrypted storage device the size of any small, portable external hard drive.  But the Aegis Fortress L3 is much more.  It has 256-bit AES XTS Encryption and is FIPS 140-2 Level 3 compliant.

While it’s small, it can hold of to 16TB of data, allowing you to travel with very sensitive data, safely, wherever you go.  If lost or stolen, it’s just a brick without your password.  It’s available in both HDD and high speed SSD models.  What I like a lot, and I’ve been a software developer since I was 12 years old, is that it’s software-free.  This is so important.  First, you don’t need to update encryption or drivers and there’s little to no risk of it being exploited, with the exception of someone, heaven-forbid, holding a gun to your head and demanding the password. It uses and onboard hardware-based keypad PIN system, authenticated with ultra-fast USB 3.1 (3.0) data transfer speeds. All Data is encrypted on the fly and all PINs and Data remain encrypted while the drive is at rest.

Cross-platform and works where other solutions cannot

On that note, it’s also completely cross-platform compatible and OS agnostic; the Aegis Fortress is great for with Windows, Linux, Mac, Android, Symbian and Chrome. It also provides great benefits where software-authenticated encrypted devices can’t function, such as embedded systems and equipment in possession of a powered USB port and storage file system but no keyboard.

Some of the features that I love in this Apricorn product are:

So they’ve thought about everything – from physical security and tamper-proof housing to ruggedization and longer-life keypad.  They also made the PIN lengths programmable from 7 to 16 digits.  It also has some cool brute-force defenses including selecting the number of consecutive invalid PIN attempts permitted before truly becoming a brick, by crypto erasing.  For example, if the device comes under a physical brute force attack, your data is protected with a programmable “Brute Force Hack Defense Mechanism” which, if the programmed number (between 4 and 20) of consecutive incorrect password entries has been attempted, the device will delete its own encryption key and destroy the ability to decrypt its stored data.  It also has an unattended auto-lock feature, a lock override feature and a drive reset feature.  It also has a Self-destruct PIN (if you are at gunpoint), which erases all of the drive’s contents, leaving it in normal working order and appearing in a like-new condition.

The company offers excellent support and documentation  with a short quick-start guide, if you are in a rush, and has a nice media library and videos for their excellent products.

This is a Very Highly Recommended Device

With billions of records already stolen and millions of USB and portable hard-drives lost or stolen each year, the best thing you can do is move to hardware-based encrypted storage.  As a strong proponent of encryption and personally identifiable information (PII) protection, this is a must have in your security arsenal.

Headquartered in Poway, California, Apricorn provides hardware-based 256-bit encrypted external storage products to companies and organizations that require high-level protection for their data at rest. Since we began in 1983, dozens of award-winning innovations have been developed under the Apricorn brand as well as for a number of leading computer manufacturers on an OEM basis. Apricorn’s unique approach to employing 256-bit internal and portable HDD encryption is particularly valuable for verticals whose data security practices are regulated (e.g., finance, healthcare, education, and insurance.) And for federal, state, and local governments, Apricorn encrypted USB drives and devices set the standard for data security for both North America and the rest of the world. Since every Apricorn Aegis drive is encrypted and authenticated exclusively by way of its own onboard keypad and internal hardware, there is never any software involvement in these critical security parameters. As such, Apricorn device CSPs are never shared with that device’s host computer. As we continue to create innovations to defend against today’s threats, as well as to anticipate tomorrow’s, rest assured that your secrets are safe with us no matter if you need portable HDD encryption, an encrypted USB thumb drive, or any other secure data storage device.  To reach them, they are headquartered at 12191 Kirkham Road / Poway, CA 92064 and you can call them Toll-Free: 800.458.5448 or if you are in the San Diego Area: 858.513.2000.

Side Note:  If you read my international best selling book on the Cryptoconomy and you’re thinking about storing your Crypto somewhere safe, this could be the device for you.