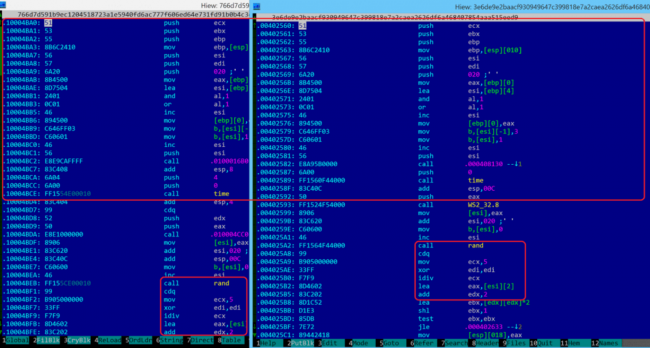 In the IT security community several experts start linking the WannaCry ransomware to the Lazarus Group due to similarities in the attack codes.

The security researcher at Google Neel Mehta published a mysterious tweet using the #WannaCryptAttribution hashtag. What did he mean?

According to experts at Kaspersky, the string is a portion of code that Neel noticed in a very early variant of WannaCry ransomware found in February 2017 and in one of the malware used by the notorious Lazarus APT group dated back February 2015.

What does it all mean?

The experts at Symantec have spotted in the past at least three strains of malware used by the group, Backdoor.Fimlis, Backdoor.Fimlis.B, and Backdoor.Contopee, which have been used in targeted attacks against financial institutions.

The attackers exploited “watering holes” in order to infect the machines of a specific audience with previously unknown malware.

Researchers speculate the group was responsible for the last wave of attacks against banks worldwide, for the Sony hack, and the DarkSeoul operation.

Is it possible that attackers behind the WannaCry have used a false flag?

Experts from Kaspersky believe that the theory of a false flag is improbable because the portion of shared code appears only in the early version of WannaCry, but was removed later.

“For now, more research is required into older versions of Wannacry. We believe this might hold the key to solve some of the mysteries around this attack. One thing is for sure — Neel Mehta’s discovery is the most significant clue to date regarding the origins of WannaCry.” reads a blog post shared by Kaspersky Lab.

The question is: is there a link between early February WannaCry variant and the sample used in the recent massive cyber attacks?

According to Kaspersky, the answer is “YES”.  The recent variant is able to target more file extension targets for encryption.

“We strongly believe the February 2017 sample was compiled by the same people, or by people with access to the same sourc ecode as the May 2017 Wannacry encryptor used in the May 11th wave of attacks.” continues Kaspersky.

New analysis of Diavol ransomware reinforces the link to TrickBot gang LockBit 2.0, the first ransomware that uses group policies to encrypt Windows domains FBI flash alert warns on OnePercent Group Ransomware attacks PYSA ransomware gang is the most active group in November Experts devised a new attack to bypass Microsoft PatchGuard Experts warn of attacks exploiting CVE-2021-40438 flaw in Apache HTTP Server Cybersecurity Experts Share Their Predictions for 2022 Cyber Crime Is on The Rise and These Experts Have the Knowledge You Need
May 17, 2017