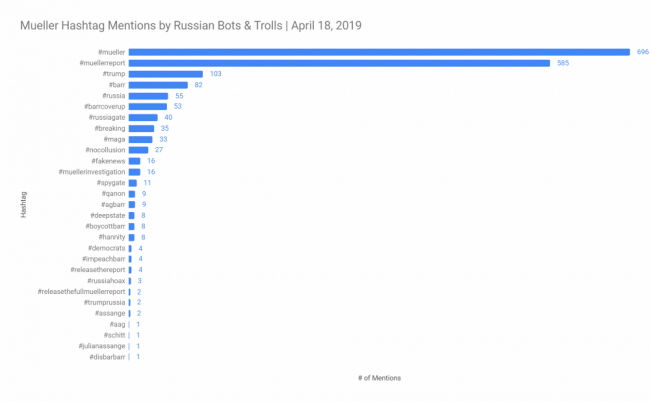 Experts at security firm SafeGuard reported that Russian Twitter bot activity raised up by 286 percent in the wake of the release of the Mueller Report.

Social media platforms like Twitter are key components of misinformation campaigns carried out by nation-state actors, today we discuss Twitter bot activity after the release of the Mueller report.

Experts at security firm SafeGuard reported that Russian Twitter bot activity raised up by 286 percent in the wake of the release of the Mueller Report. The company already tracked over 600,000 known bots and trolls.

The experts also observed a significant increase in the number of unique bots and trolls (+48%) from the previous day, a circumstance that suggests the involvement of an army of dormant Twitter bot accounts previously created.

Thousands of Twitter bot accounts were used by the Russian propaganda machine to influence the sentiment of netizens on the content of the Mueller Report.

Experts observed a spike in the use of hashtags related to the Mueller Report in messages published by Russian-linked bots and trolls. We are in the middle of a complex and coordinated misinformation campaign.

According to George Kamide, Director at SafeGuard Cyber,Twitter bot and troll hashtag use increased 852 percent overall. The experts observed a 5,000 percent increase in usage for the #mueller hashtag.

Below the top five hashtags used in the disinformation campaign launched just after the publication of the Mueller Report.

Data collected by SafeGuard confirm the intensification of the presence of Russian bots on Twitter.

In November 2018, Twitter announced to have deleted more than 10,000 accounts managed by bots that were posting messages to influence U.S. Midterm election. In January 2019, the social media platform removed 418 accounts associated with Russian entities.

How To Make The Most of Increased Cybersecurity Spend Cyber Threats Driving Insurance Claims Activity China-linked APT uses a new backdoor in attacks at Russian defense contractor Russian government claims to have dismantled REvil ransomware gang Hackers disrupted live broadcasts at Channel Nine. Is it a Russian retaliation? Biden discussed Russian ransomware gangs with Putin in a phone call 58% of all nation-state attacks in the last year were launched by Russian nation-state actors Understanding Russian Hacking Tactics to Power Up Security in the Energy Sector
April 24, 2019