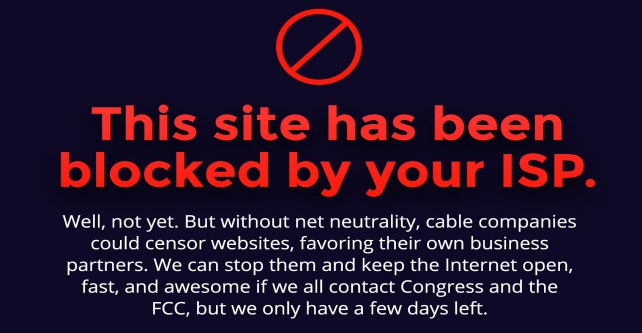 Roll Back of Net Neutrality is a Watershed Moment

Fake News Killed Net Neutrality, Will Telecom Kill the News?
If you think the end of net neutrality is the bad news today, you’re in for some more. Remember that whole thing about election interference? It may have been adapted—possibly with a criminal upgrade—to hack our regulatory process.
Substitute fake news with fake views, and you’ll get a snapshot of what may have just occurred.

In this episode of “What Will They Think of Next?” we look at what may be an innovative type of disinformation that yokes identity theft to a political position.
Most people don’t consider their name, address and email address to be “sensitive information,” or personally identifiable information (PII) as that sort of data is called among privacy and cyber-security professionals. Data compromises that only include that sort of information are met with shoulder shrugs for the most part. That will come to an end now.

The crime in question, if one has occurred, would be the pushing of fake consumer views to sway a decision regarding a regulatory matter using purloined PII—specifically, first and last name, home address and email address.

So, there was an organized campaign, or campaigns, to end net neutrality. A great deal of the messaging was identical. It looks a lot like databases containing stolen email addresses, names and addresses (think: Target, Yahoo, Uber)—the hithertofore most shrug-worthy kind of breach—may have been used to swamp (pun intended) the FCC with fake, pro-telecom, anti-net neutrality messages.

New York’s Attorney General Eric Schneiderman is on the case, focusing on this odd brand of information insecurity after more the 2 million fake comments regarding net neutrality regulations were posted in response to FCC chairman Ajit Pai’s call for dialogue on its site regarding the proposed rollback of the Obama-era rules that has now come to pass.

At issue in A.G. Schneiderman’s complaint is the anti-net neutrality messaging posted on the comment thread promoted by the FCC chair. New York alone has received more than 5,000 complaints about fake comments posted to the FCC site. Other states that were big contributors to the spam messaging: Florida, Texas and California.

One of the trickiest problems as we head toward the mid-term elections next year is not vulnerabilities in the various vote counting hardware or software out there. While most states are not where they need to be with regard to their physical and digital election security (I work on this issue daily), all the challenges they face are fixable.

The hard part is less concrete. It is something called CogSec, or cognitive security. You know about this because our forty-fifth president can’t stop talking about it. Fake news is an ideological chameleon. If it serves one’s interests these days, the chances seem pretty good that the authenticity of whatever beneficial information will be rubber-stamped “Close Enough.” If it presents an oppositional point of view, it’s war.

Will telecom slow down the true news for the fake news in the future, or vice versa? Only telecom knows. Assuming the FCC plows forward with this disastrous plan, they can do it now, because they’ve just been handed the keys to our collective digital future. Do you really want telecom to decide whether the website of the Republican or Democratic candidate of any race in the nation downloads faster? How about if telecom decides it doesn’t want you to download news about a crime that telecom committed? This ruling turns a theoretically limitless freeway into a two-lane toll road.

The presidential election was Ground Zero for the cogsec conversation, after a proliferation of fake news stories created a cultural miasma of distrust.
Now that it looks like net neutrality regulations are a thing of the past, it will be entirely legal for the companies that benefit most from the end of net neutrality to make it really hard for you to download sites about why we need net neutrality.
Welcome to the brave new (more expensive, less diverse) world.

Adam K. Levin is a consumer advocate with more than 30 years of experience and is a nationally recognized expert on cybersecurity, privacy, identity theft, fraud, and personal finance. A former Director of the New Jersey Division of Consumer Affairs, Mr. Levin is Chairman and founder of CyberScout and co-founder of Credit.com. Adam Levin is the author of Amazon Best Selling Book Swiped: How to Protect Yourself in a World Full of Scammers, Phishers and Identity Thieves.

Cyber Threats Facing Financial Institutions Amid COVID-19 Cyber Defense Magazine nominated Cobwebs Technologies for Its 2021 InfoSec Awards for threat intelligence Does Sunburst Have Your Confidential Emails and Database Data? Making the Most of Virtual Cybersecurity Events for your Company and the Community Working from Home? You’re Not Alone The Best Network Protection: Go Deep or Go Broad? Cybersecurity Predictions For 2021 China-linked APT31 group was behind the attack on Finnish Parliament
December 15, 2017