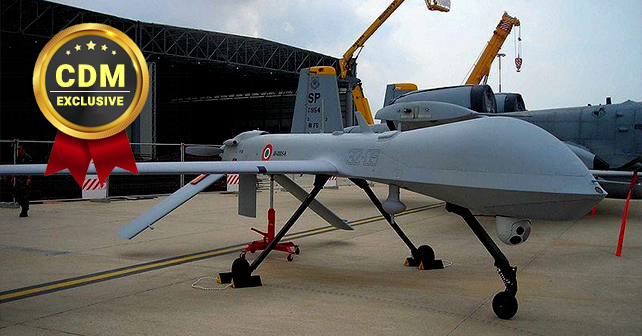 Militaries in the past adhered to the philosophy that bigger and more powerful was better. Today’s warfighters are flipping that notion on its head, seeking out platforms that are lighter, faster and invisible to the enemy, especially with the rising demand for smaller Unmanned Aerial Vehicles (UAVs). Global militaries will spend $70 billion on UAVs by 2020, according to a recent report by Goldman Sachs. While militaries are buying more UAVs, the importance of advancing UAV technology – especially as it relates to Intelligence, Surveillance, and Reconnaissance (ISR) missions – cannot be underestimated.

As both military and commercial operations continue to globalize, the need for highly efficient systems that can relay data back to the ground over long distances is steepening a trend in communications technology to meet these requirements.

Unmanned technology is already being tasked with more mission-critical functions than ever before including flying undetected, carrying anti-jam capabilities all while transmitting more data. The next generation of Class III UAV systems requires payloads and systems optimized for lower size, weight, and power (SWaP). These advances will deliver systems that improve flight duration, range and throughput to ensure situational awareness for warfighters.

The need for beyond line of sight (BLOS) communications requires installing SATCOM systems on UAVs. That is driving significant demand for lower SWaP systems and industry is responding. As the operational landscape has expanded globally, militaries are increasingly relying on UAVs to gather intelligence over long distances. UAVs are an essential tool, helping today’s warfighters fight smarter on the ground by keeping them informed throughout their missions.

Advances in satellite technology, including smaller modems and antennas, are delivering significant progress toward meeting reduced SWaP requirements. As an example, the innovative Hughes HM50 is a credit card sized, software definable modem running specialized waveforms, which can be integrated with smaller and lighter antennas yet still deliver the high data throughput required.

When operating over line-of-sight (LoS) communications links, airborne platforms are generally limited to about a 150-mile range before losing signal to atmospheric losses, the curvature of the Earth, or terrestrial environments that block the signal. UAV’s need satellite communications that extend beyond line of site in order to expand the operational range of the aircraft and allow for operations throughout mountains and valleys.

Today’s warfighters need more data and capacity in less space. With more efficient data compression such as MPEG5 (H.265), systems are now providing the same video quality at half of the data rate. For example, better video compression today requires only a 1–2 Mbps data link instead of a 2-4 Mbps data link that uses older MPEG 4 encoding technologies. At the same time, higher power, spot beam satellite systems are allowing these smaller antenna systems to close the link at higher rates.

It’s not enough for UAVs to move faster over longer distances, they often need to operate undetected in contested environments. This is where Low Probability of Intercept and Low Probability of Detection (LPI/LPD) features come in as critical capabilities. At the end of the day, adversaries can’t jam devices they cannot easily detect. Waveform enhancements make it more likely that UAVs will be able to move through airspace while transmitting data undetected.

Militaries still need short-term solutions to aid in SATCOM operations security (OPSEC) and should be looking to commercial technology, which is rapidly innovating new possibilities.

As UAV’s supporting ISR missions continue to shrink – in size and cost – with new BLOS communications technologies, new applications will emerge to support our warfighters in the field. UAVs are an integral part of the seismic shift in modern warfare-arming warfighters with better