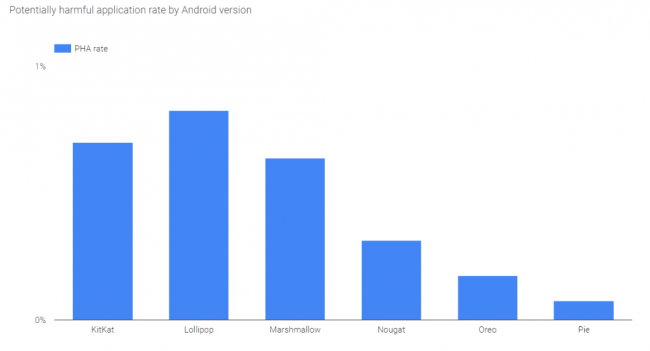 According to Android Ecosystem Security Transparency Report the number of potentially harmful applications has fallen from 0.66% in Lollipop to 0.06% in Pie

Google published the first Android Ecosystem Security Transparency Report that revealed that the number of potentially harmful applications (PHAs) discovered on Android 9 Pie devices has been reduced by half compared to the previous versions.

According to the Android Ecosystem Security Transparency Report, the number of potentially harmful applications (PHAs) has fallen from 0.66 percent in Lollipop to 0.06 percent in Pie.

The number obtained from the analysis of malware detected by Google Play Protect scans that was launched in May 2017 to protect the devices running its Android OS.

The system is integrated into the Google Play Store app, this means that its usage is transparent to the end user that doesn’t need to install or enable it on his device. It analyzes malicious applications distributed through the Play Store and third-party app stores.

“Google Play Protect continuously works to keep your device, data and apps safe. It actively scans your device and is constantly improving to make sure you have the latest in mobile security. Your device is automatically scanned around the clock, so you can rest easy.” reads the description published by Google.

Google highlighted the importance of installing applications from its official store, only 0.09 percent of devices that used Google Play Store were infected in 2017, that corresponds for 1.8 million phones.

Measures implemented by Google to remotely control the presence of malicious code are the root cause of the significant drop in the number of malicious applications running on Android devices.

The analysis of the top 10 countries with the highest volume of Android devices revealed that Indonesia, India, Brazil, and the US have the highest percentage of devices with at least one potentially harmful application installed.

“India continues to be affected by trojans, such as Ghost Push and Hummingbad, which we described in the 2016 Year in Review. The spike in Q1 2017 was caused
by a legitimate video player from outside of Google Play that downloaded and
installed PHAs on user devices. We believe that the developer used an advertising
network that pushed PHAs and did not know about this behavior.” states the report.

“The situation looks different in the USA. Many of the PHA installations come from
popular rooting tools and an app that fakes GPS coordinates to cheat at Pokémon
Go. We don’t remove these apps, but still warn users that these apps may degrade
device security.
The PHA profile of Brazil looks different from India and the USA. Major
contributors to Brazil’s PHA rate were two pre-installed apps that send SMS
to premium-rate SMS numbers.” continues the report.