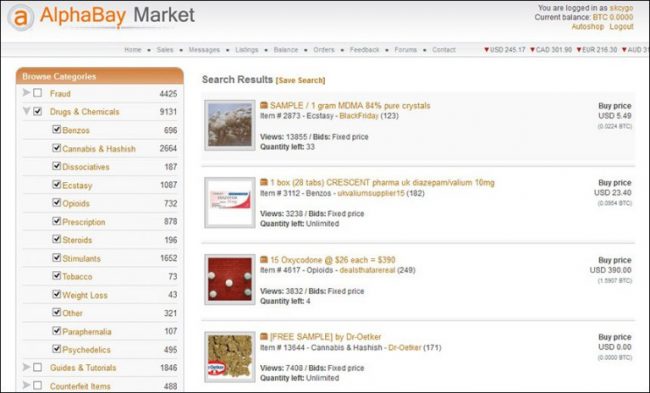 One of the most active drug sellers on the Dark Web was charged by law authorities and ordered to forfeit over $4 million in cryptocurrency.

The US Department of Justice (DoJ) charged Richard Castro (36) (aka “Chemsusa,” “Chems_usa,” and “Jagger109”) with participating in a conspiracy to distribute carfentanil, fentanyl, and a fentanyl analogue over the “dark web,” including on AlphaBay and Dream Market.

“On one dark web marketplace, Dream Market, “Chemsusa” boasted that it had completed more than 3200 transactions on other dark web markets, including more than 1,800 on AlphaBay.” reads the press release published by the DoJ. “The customer feedback for “Chemsusa” included, “Extremely potent and definitely the real Carf,” as well as “The Carfent is unbelievably well synthesized, keep up the amazing work.”

Castro completed thousands of transactions with positive feedback from its buyers, but last year opted to leave the black markets in the Dark Web and continue to sell drugs directly to its customers via encrypted email.

Castro was requesting a fee up-front to connect and was identified by an undercover officer that paid the fee, obtained the encrypted email address, and placed orders with CASTRO.

The co-conspirator, Luis Fernandez (41), was shipped the drugs to the customers, including the police officer that also identified him.

“RICHARD CASTRO, 36, of Windermere, Florida, and LUIS FERNANDEZ, 41, of the Bronx, New York, are each charged with one count of conspiracy to distribute and possess with the intent to distribute three controlled substances – carfentanil, phenyl fentanyl, and fentanyl – as well as one count of distributing these controlled substances via the Internet.” continues the DoJ. “CASTRO is also charged with one count of laundering narcotics proceeds, which carries a maximum sentence of 20 years in prison.  The statutory maximum sentences are prescribed by Congress and are provided here for informational purposes only, as any sentencing of the defendants will be determined by the judge.”

Castro was accepting payments in Bitcoin (BTC), that were distributed in seven cryptocurrency wallets. Then the popular drug seller laundered the narcotics proceeds through the purchase of valuable assets and a huge amount of Zimbabwe banknotes.

According to the investigators, the man purchased approximately 100 quadrillion Zimbabwe banknotes.

“Manhattan U.S. Attorney Geoffrey S. Berman said:  “As he admitted today, for years, Richard Castro used the dark web to distribute prolific quantities of powerful opioids, including fentanyl and carfentanil.” states the DoJ. “Castro thought he could hide behind the anonymity of the internet, and use online pseudonyms to deal drugs – like ‘Chems_usa’ and ‘Chemical_usa.’  Thanks to our law enforcement partners, ‘Chems_usa’ is now in U.S. prison.”

“As he admitted today, for years, Richard Castro used the Dark Web to distribute prolific quantities of powerful opioids, including fentanyl and carfentanil,” said Manhattan US Attorney Geoffrey Berman. “Castro thought he could hide behind the anonymity of the Internet, and use online pseudonyms to deal drugs.”

The press release confirmed that sentencing is scheduled for October 25, 2019, at 2:30 p.m. before Judge Cote.