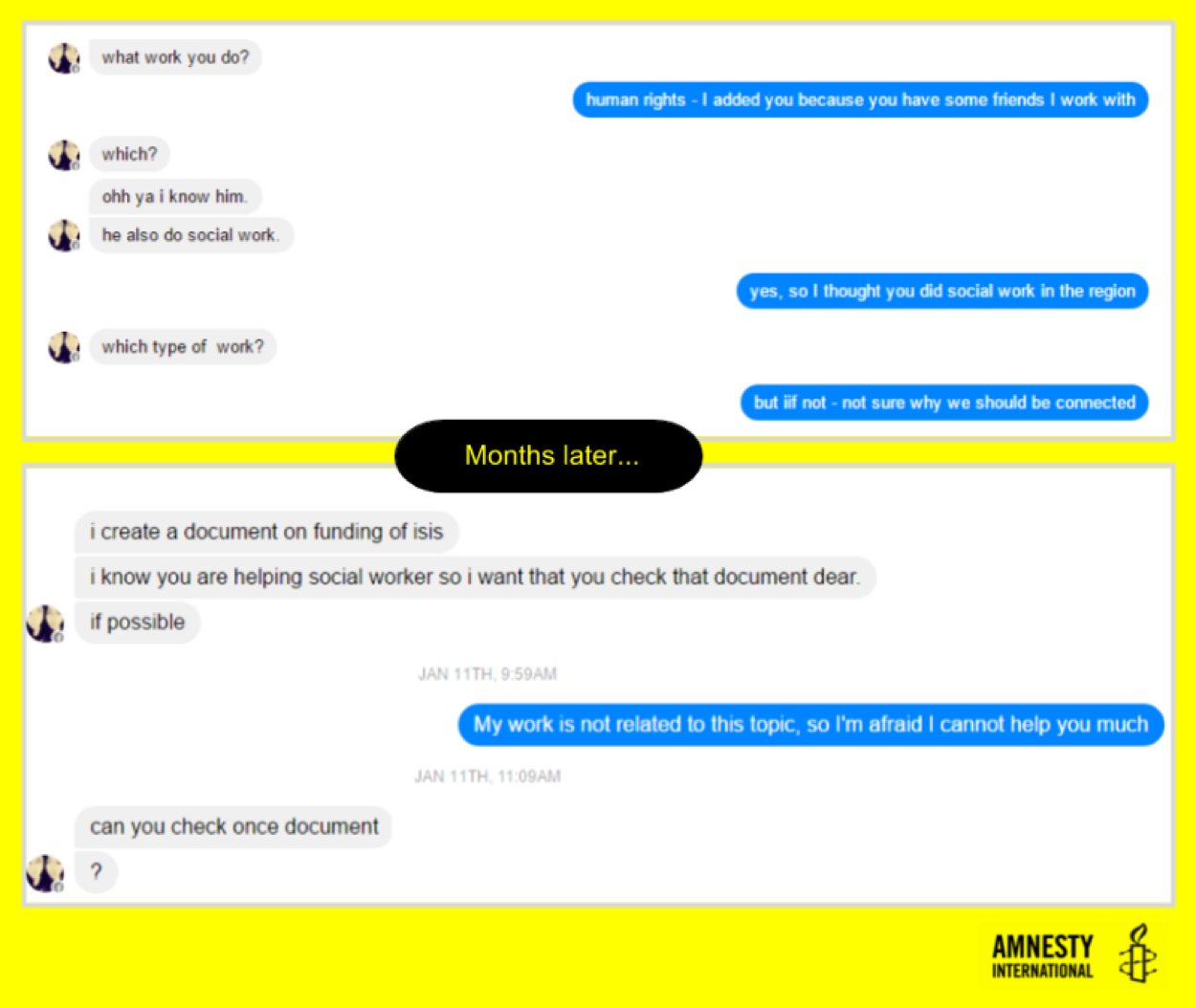 Human rights organizations and journalists continue to be a privileged target of phishing campaigns that attempt to steal the Google credentials of the victims. The malicious messages try to lure victims into viewing documents online.

“Over the course of 2016 — and particularly intensifying towards the end of the year — several individuals known to Amnesty International were approached via email and through social media by “Safeena Malik”, seemingly an enthusiastic activist with a strong interest in human rights.” reads a blog post published by popular researcher Claudio Guarnieri on Medium. “What lied beneath this facade was a well-engineered campaign of phishing attacks designed to steal credentials and spy on the activity of dozens of journalists, human rights defenders, trade unions and labour rights activists, many of whom are seemingly involved in the issue of migrants’ rights in Qatar and Nepal.”

The threat actors created profiles for the character “Safeena Malik” on every social media, including Facebook, Google, LinkedIn, and Twitter. The information used by the attackers seems to have been harvested from another social media account.

“The various social media accounts communicated regularly with several of the victims we identified, often for many months. It appears that the attackers may have impersonated the identity of a real young woman and stole her pictures to construct the fake profile, along with a professional biography also stolen from yet another person.” added Claudio Guarnieri.

Among the various profiles created for Safeena Malik, the most active appear to be the Facebook and LinkedIn once. (where the identity had accumulated more than 500 connections).

The LinkedIn profile has built a network composed of more than 500 connections. The attackers targeted individuals associated with the rights of migrant workers in Qatar, journalists, activists, and labor union officials.

A large number of workers from Nepal and other countries have been brought to Qatar to work with companies involved in the construction of stadiums and facilities for the 2022 World Cup, so human rights activists are concerned over the treatment of those workers. It has been estimated that more than 1,200 migrant workers from Nepal and India have already died.

Victims of the spear phishing campaign received malicious email and social media messages from “Safeena Malik,” who was asking them to view the content of documents or presentations on Qatari human rights issues.

In other cases, the attackers were offering forged requests to link up via Google’s Hangouts chat service.

The phishing messages included links to a phishing site crafted specifically trick visitors into providing their Google login credentials. Once the victims provided the credentials, they were redirected to an actual Google Docs document pilfered from another source to avoid suspicions.

Who is behind the Operation Kingphish?

“in the absence of clear evidence, trying to identify the entity behind this attack can only be speculative. ” states Guarnieri.

Despite the lack of conclusive evidence, the fact that the spear phishing attacks specifically target individuals active on human rights issues in Qatar, suggests the involvement of a state-sponsored actor. We believe it is also possible that these attacks have been orchestrated by contractors.

“We believe it is also possible that these attacks have been orchestrated by contractors.” concluded Guarnieri.

The Qatari government has denied involvement in the Operation Kingphish campaign.