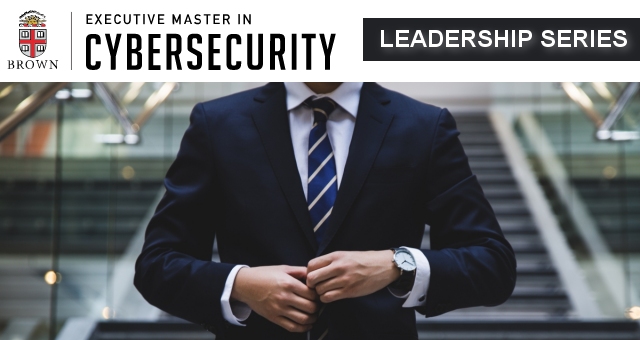 It’s one thing to complete a rigorous advanced degree in cybersecurity— it’s another to finish two at once.  Meet that rare professional, Major Michael Perrottet, who simultaneously completed the Brown University Executive Master in Cybersecurity (EMCS) program and the US Naval War College Master in Defense and Strategic Studies.

When asked why he took on this ambitious academic commitment, Perrottet answered,

“I pursued both these advanced degrees because cyber-conflict requires full societal engagement, including resources from military and civilian sectors.  As a military professional, understanding the pervasiveness of threats in the cyber domain and proactively arming against vulnerabilities on all fronts – like passwords or social media – is critical.  These vulnerabilities might seem innocuous, but left unmitigated, they pose a critical threat to our national security.”

Stationed at the United States Marine Corps Headquarters in the Pentagon, Perrottet’s extensive combat history prepared him for the stress of this heavy academic workload.  Perrottet has been deployed five times as a helicopter pilot in direct combat operations—three in Iraq and twice in Helmand Province, Afghanistan. In 2011, he served on the ground as a Forward Air Controller with the 1st Air Naval Gunfire Liaison Company (ANGLICO).  In his last deployment, he supported the Pacific Combatant Commander in Japan, South Korea, Thailand and the Philippines.

“I was amazed by Silicon Valley’s culture of innovation and I related to their sense of mission.  But it also taught me to be wary of bubbles and group-think. Silicon Valley is a community of outstanding engineers and scientists that probably would not have gone to market with fault-tolerant code if they had someone in the mix concerned with security.  Now we’re having to layer it on.”

To ensure you have the critical skills needed to be a cybersecurity leader, learn more about the Brown University Executive Master in Cybersecurity, an 18-month program for professionals designed to cultivate high-demand industry executives with the unique ability to devise and execute integrated, comprehensive cybersecurity strategies.