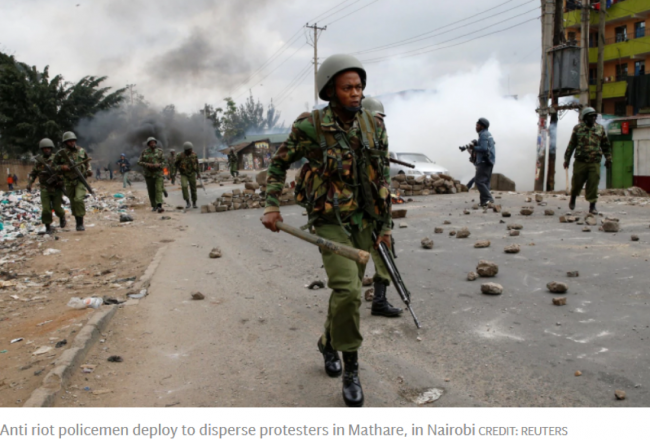 Kenya opposition claims hackers have manipulated the results of the recent election by breaking into the database of Kenya’s electoral commission.

According to Kenya opposition, led by Raila Odinga, hackers have manipulated the results of the recent election by breaking into the database of Kenya’s electoral commission.

The President Uhuru Kenyatta was re-elected and protests and violence broke out almost immediately.

“At least 24 people, including a 9-year-old girl, have been killed in Kenya in the violence that erupted after the re-election of President Uhuru Kenyatta, according to the Kenya National Commission on Human Rights.” reported the CNN.

“Specifically, these cases indicate that the casualties were felled by bullets and the same has been corroborated by family and community members who have indicated that they were killed during the protests which broke out in various parts of the country,” the independent rights group said in a statement. Of those death, 17 were killed in the capital Nairobi, the group said.

Raila Odinga claims hackers have used the credential of a murdered employee of the electoral commission (IEBC), Chris Msando, to hack into an electronic voting system and manipulate the votes.

Msando was a top IT official at the IEBC that was tortured and killed in late July.

The politician supported his accusation by releasing an alleged log from an IEBC server that confirms it was altered to increase Kenyatta’s totals by 11 percent and hide the manipulation.

“These results are fake, it is a sham. They cannot be credible,” Odinga told journalists.

“This is an attack on our democracy. The 2017 general election was a fraud.”

He later released what he claimed was a log from an IEBC server to support his allegations that the server was configured to increase Kenyatta’s totals by 11 percent and cover up the modifications.

At the time I was writing the log was not yet verified by any independent researcher.

Odinga refused the result of the election and claims Kenyatta’s skullduggery, according to the politicians the hackers manipulated the results for both the presidential and the general election.

“The electoral fraud and fabrication of results was massive,” Odinga said. “It has always been common knowledge that Uhuru Kenyatta’s regime was a fraud. This takes Mr Kenyatta and [deputy president] William Ruto’s fraud … to another level.”

Odinga did not reveal the source of his information to protect it.

Odinga is inviting his supporters to “remain calm as we look deep into this matter,”