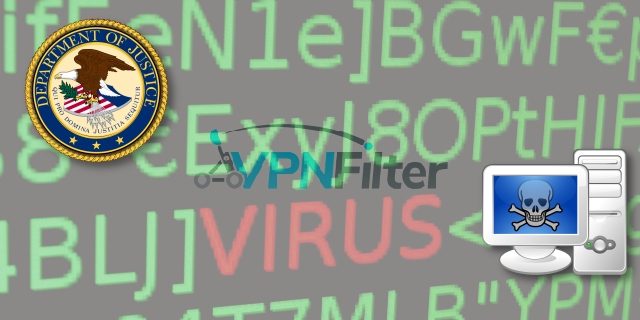 The Justice Department announced an effort to disrupt the VPNFilter botnet of hundreds of thousands of infected home and office (SOHO) routers and other networked devices under the control of a Russia-linked APT group.

Yesterday Talos and other security firm revealed the discovery of a huge botnet tracked as VPNFilter composed of more than 500,000 compromised routers and network-attached storage (NAS) devices, now more details emerged on the case.

The experts believe the VPNFilter was developed by Russia, the associated malware compromised devices across 54 countries, most of them in Ukraine.

On May 8, Talos researchers observed a spike in VPNFilter infection activity, most infections in Ukraine and the majority of compromised devices contacted a separate stage 2 C2 infrastructure at the IP 46.151.209[.]33.

The US Justice Department announced it had seized a domain used as part of the command and control infrastructure, it explicitly refers the Russian APT groups (APT28, Pawn Storm, Sandworm, Fancy Bear and the Sofacy Group) as the operators behind the huge botnet,

“The Justice Department today announced an effort to disrupt a global botnet of hundreds of thousands of infected home and office (SOHO) routers and other networked devices under the control of a group of actors known as the “Sofacy Group” (also known as “apt28,” “sandworm,” “x-agent,” “pawn storm,” “fancy bear” and “sednit”).” reads the press release published by the DoJ.

“Today’s announcement highlights the FBI’s ability to take swift action in the fight against cybercrime and our commitment to protecting the American people and their devices,” said Assistant Director Scott Smith. “By seizing a domain used by malicious cyber actors in their botnet campaign, the FBI has taken a critical step in minimizing the impact of the malware attack. While this is an important first step, the FBI’s work is not done. The FBI, along with our domestic and international partners, will continue our efforts to identify and expose those responsible for this wave of malware.”

The VPNFilter botnet targets SOHO routers and network-access storage (NAS) devices and uses several stages of malware. The experts highlighted that the second stage of malware that implements malicious capabilities can be cleared from a device by rebooting it, while the first stage of malware implements a persistence mechanism.

The Justice Department had obtained a warrant authorizing the FBI to seize the domain that is part of the command and control infrastructure of the VPNFilter botnet.

Technically the operation conducted by the US authorities is called “sink holing,” the seizure of the domain will allow law enforcement and security experts to analyze the traffic associated with the botnet to gather further info on the threat and temporarily neutralize it.

“In order to identify infected devices and facilitate their remediation, the U.S. Attorney’s Office for the Western District of Pennsylvania applied for and obtained court orders, authorizing the FBI to seize a domain that is part of the malware’s command-and-control infrastructure.” continues the DoJ.

“This will redirect attempts by stage one of the malware to reinfect the device to an FBI-controlled server, which will capture the Internet Protocol (IP) address of infected devices, pursuant to legal process. A non-profit partner organization, The Shadowserver Foundation, will disseminate the IP addresses to those who can assist with remediating the VPNFilter botnet, including foreign CERTs and internet service providers (ISPs).”

The owners of the compromised SOHO and NAS devices should reboot their devices as soon as possible, the operation will temporarily remove the second stage malware and will cause the first stage malware to connect the C&C domain for instructions.

“Although devices will remain vulnerable to reinfection with the second stage malware while connected to the Internet, these efforts maximize opportunities to identify and remediate the infection worldwide in the time available before Sofacy actors learn of the vulnerability in their command-and-control infrastructure.” continues the DoJ.

Experts are particularly concerned by the destructive features implemented by the malware that could allow attackers to burn users’ devices to cover up their tracks.

Part of the cyber security community believes that the botnet could be used to launch a massive attack during the Ukrainian celebration of the Constitution Day, last year the NotPetya wiper attack was launched on the same period.

Both Justice and Cisco said they were releasing details of the problem before having found a strong, permanent fix. Justice said that by seizing control of one of the domains involved in running VNPFilter, it will give owners of infected routers a chance to reboot them, forcing them to begin communicating with the now-neutralized command domain.

The vulnerability will remain, Justice said, but the move will allow them more time to identify and intervene in other parts of the network.