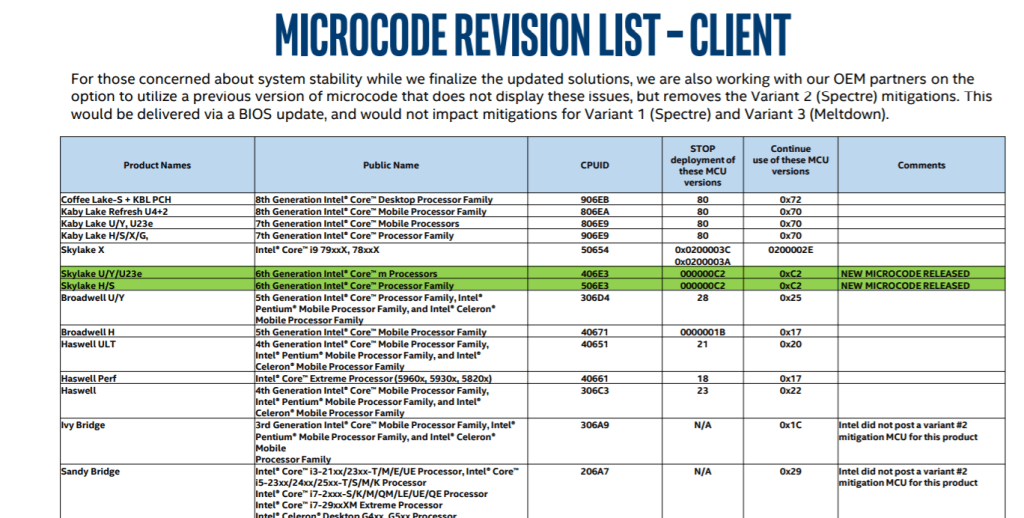 The company provided beta releases for the updates to apply to other processors to customers and partners to conduct extensive tests before the final release.

We all know the disconcerting story about the security patches released by Intel, on January 3, white hackers from Google Project Zero have disclosed some vulnerabilities in Intel chips called Meltdown (CVE-2017-5754) and Spectre (CVE-2017-5753 and CVE-2017-5715), Intel promptly released security patches but in many cases they caused problems to systems.

Many companies rolled out patches to revert the Intel updates, including Red Hat and Microsoft.

Now Intel seems to have a more clear idea about the cause of the problems observed after the deploy of the initial updates and release new microcode updates.

“For those concerned about system stability while we finalize the updated solutions, we are also working with our OEM partners on the option to utilize a previous version of microcode that does not display these issues, but removes the Variant 2 (Spectre) mitigations. This would be delivered via a BIOS update, and would not impact mitigations for Variant 1 (Spectre) and Variant 3 (Meltdown). ” states the microcode revision guidance issued by Intel.

Problems such as frequent reboots were related to the fix for the CVE-2017-5715 Spectre flaw (Spectre Variant 2) and affected almost any platform, including systems running on Broadwell Haswell CPUs, as well as Ivy Bridge-, Sandy Bridge-, Skylake-, and Kaby Lake-based platforms.

While many users have chosen to don’t install the patches to avoid problems, security firms are reporting the first PoC malware that exploits the Meltdown and Spectre vulnerabilities.

On January 17, experts at AV-TEST reported that they had detected 77 malware samples apparently related to the Intel vulnerabilities.