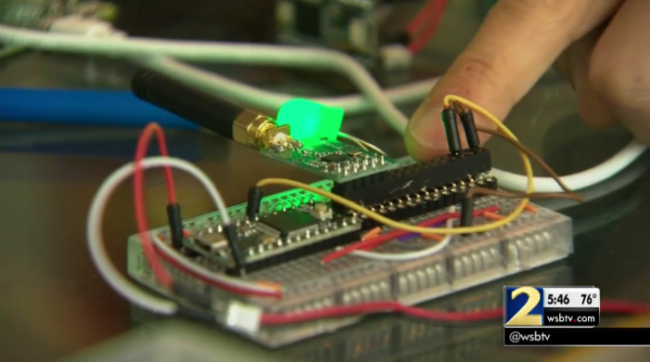 The Channel 2 journalist and Consumer Investigator Jim Strickland investigated a mysterious car theft after he received home security camera footage from a viewer in Walton County.

It seems that thieves are using a new electronic equipment to open the driver-side door of locked cars.

The analysis of the video revealed that the car thief was holding something in his hand so the journalist decided to ask the option of an expert, the special agent with the National Insurance Crime Bureau, Dave Renau.

“It’s a like device that’s being used to pop open the locks by reading the fob signal that communicates between the fob and the vehicle itself,” Renaud told Strickland.

In all the cases the car thief approach locked, parked vehicles with a mysterious device in his hand and just by clicking a button is able to open the door.

A dashboard camera in Steve Doi’s car captured a crook holding a black device before entering the car and making off with expensive electronics.

At this point, Strickland requested the support of a hacker, the popular expert Samy Kamkar.

In August 2015, Samy Kamkar presented RollJam, a $30 device designed to exploit a design flaw in the protocol that determines how keys communicate with car and unlock the majority of car doors.

Kamkar agreed to demonstrate how to break into a car without a key, exactly like a car thief.

Kamkar explained that the hackers capture the radio-frequency signal of the fob, he made it with his laptop, in order to analyze it.

“Basically, I’m looking at the signal that the key fob sends to the vehicle,” Kamkar told Strickland.

Once he detected the signal he programs a circuit board to intercept the coded unlock signal.

Kamkar used the coded unlock signal to his device in order to unlock the car door by pushing a button.

“Virtually every vehicle is vulnerable to the same type of attacks,” Kamkar explained to Strickland.

The device used by Kamkar is not able to start the ignition, but Atlanta police confirmed to have investigated cases in which the car thief used a device that has done it.

The detective Steven O’Hare told Strickland that he observed also a case in which the car thief opened the door of the vehicle in a classic way by popping a door handle off, but once inside, he used a particular electronic control module. Then he plugged it into the car On-board diagnostics (OBD) port to start the car.

Strickland also reported the testimony of a popular car thief who confirmed the existence of such a device, the same one that allowed the criminal to steal at least 16 different SUV models.