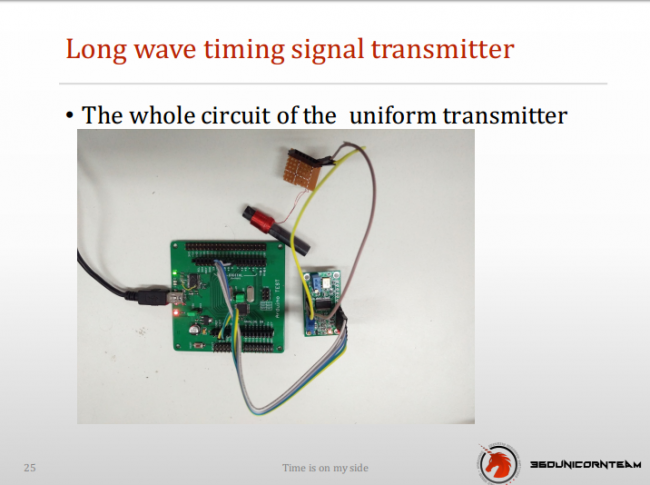 A couple of experts demonstrated how to wirelessly change the time on NTP servers over long distances using an inexpensive equipment.

The HACK IN THE BOX conference is a hotbed of interesting hacks,  today I will present you the results of a research conducted by the researchers Yuwei Zheng and Haoqi Shan from Qihoo360 firm that explained how a remote attacker can shift time on a stratum 1 NTP server by sending it forged radio time signals.

The NTP is one of the most important protocols on the Internet, it is used to synchronize the time between computers. The attack on an NTP server could have serious consequences, it can misalign machines causing malfunctions, it can allow the authentication of entities using expired credential or digital certificates.

The Network Time Protocol is a hierarchical protocol that is divided into stratum which define the distance from the reference clock. The stratum 0 is represented by reference clocks (i.e. atomic, GPS and radio clocks (JJY, WWVB, DCF77 and WWVH)), the machines on the other stratum are synchronized with the previous stratum and also with systems on the same stratum to ensure stability and robustness.

The security duo demonstrated that it is possible to wirelessly change the time on network time protocol (NTP) servers over long distances using a low-cost equipment.

The researchers explained that in order to successfully modify the time on the NTP server it is necessary to make small modifications of up to 1,000 seconds at a time, in this way it is possible to avoid server crashes.

“• Can we inject any time ? The time offset must be less than 4 hours. • Inject a time that is one hour slow than real time Server crashed !!! “ states the duo in the presentation.

“Can we inject any time ? If the time offset is more than 1000s, the server will shutdown.”

The researchers have used off-the-shelf components to build proof-of-concept (PoC) equipment that they have used to remotely target the NTP servers.

The custom-made system is able to emit fake GPS and JJY signals to interfere with the NTP servers. In their tests, the security duo targeted an NTP server that they had set up to provide the time to a mobile device.

The attack is very dangerous, an attacker can launch a GPS attack from a distance up to 100 meters, the same distance can be increased by amplifying the signals and reaching a distance of up to 2 km.

Almost any NTP servers leveraging on GPS as a reference clock is equipped with a GPS antenna that could be easily targeted by hackers.

The researchers confirmed that the attacks work against NTP systems that are widely deployed in Europe, North America, and China.

Let’s hope vendors of NTP servers will implement security protections against these types of attacks.