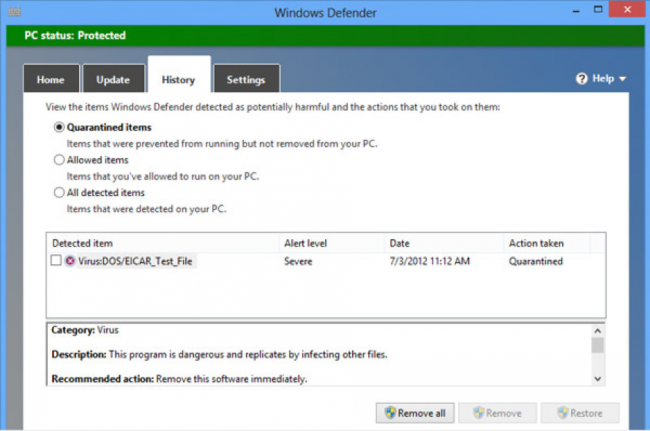 The Google Project Zero expert Tavis Ormandy has found a flaw in Windows Defender that allow attackers to bypass the Microsoft anti-virus tool.

The vulnerability resides is in the non-sandboxed x86 emulator Windows Defender uses.

The expert explained that “apicall” instruction can invoke internal emulator APIs running them with system privilege, unfortunately, it is exposed to remote attacks by default.

The hacker discovered a heap corruption issue in the KERNEL32.DLL!VFS_Write API.

“I discussed Microsoft’s “apicall” instruction that can invoke a large number of internal emulator apis and is exposed to remote attackers by default in all recent versions of Windows. I asked Microsoft if this was intentionally exposed, and they replied “The apicall instruction is exposed for multiple reasons”, so this is intentional.” wrote Ormandy.

“This full system x86 emulator runs as SYSTEM, is unsandboxed, is enabled by default and remotely accessible to attackers. I took a quick stab at writing a fuzzer and immediately found heap corruption in the KERNEL32.DLL!VFS_Write API, I suspect this has never been fuzzed before.”

After the disclosure of the bug, Ormandy published a minimal testcase to exploit the bug:

“The first call extends the length of the file to nOffset, but because the numberOfBytes parameter is 0 no space is allocated. Then you can read and write arbitrary data to an arbitrary offset to the MutableByteStream object buffer. This is a very powerful exploit primitive, and exploitation does not seem difficult.” he added.