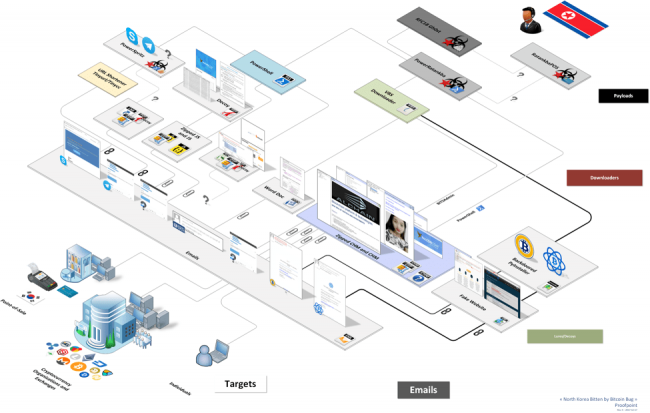 Financially motivated attacks reveal the interests of the Lazarus Group

Researchers at security firm Proofpoint collected evidence of the significant interest of the Lazarus APT group in cryptocurrencies, the group’s arsenal of tools, implants, and exploits is extensive and under constant development.

Researchers at security firm Proofpoint collected evidence of the significant interest of the Lazarus APT group in cryptocurrencies. The North Korea-Linked hackers launched several multistage attacks that use cryptocurrency-related lures to infect victims with malware.

The malicious code aims to steal credentials for cryptocurrency wallets and exchanges, but there is much more.

“Proofpoint researchers have uncovered a number of multistage attacks that use cryptocurrency-related lures to infect victims with sophisticated backdoors and reconnaissance malware that we attribute to the Lazarus Group.” reads the analysis published by Proofpoint. “Victims of interest are then infected with additional malware including Gh0st RAT to steal credentials for cryptocurrency wallets and exchanges, enabling the Lazarus Group to conduct lucrative operations stealing Bitcoin and other cryptocurrencies.”

The Lazarus APT group has increasingly focused on financially motivated attacks in the attempt to exploit the media interest in the skyrocketing prices for cryptocurrencies.

Lazarus is believed to be the first nation state attacker that is targeting a point-of-sale using a framework to steal payment card data.

The timing is perfect, the hackers are intensifying their operation around Christmas shopping season.

“The Lazarus Group is a sophisticated, state-sponsored APT group with a long history of successful destructive, disruptive, and costly attacks on worldwide targets. State-sponsored groups are generally focused on espionage and disruption. However, our findings on their recent activities relate to the financially motivated arm of Lazarus, the operations of which are peculiar to the North Korean group.” said Patrick Wheeler, director of threat intelligence, Proofpoint.

“These actions, including the targeting of cryptocurrency exchange credentials and point-of-sale infrastructure, are significant for a number of reasons: