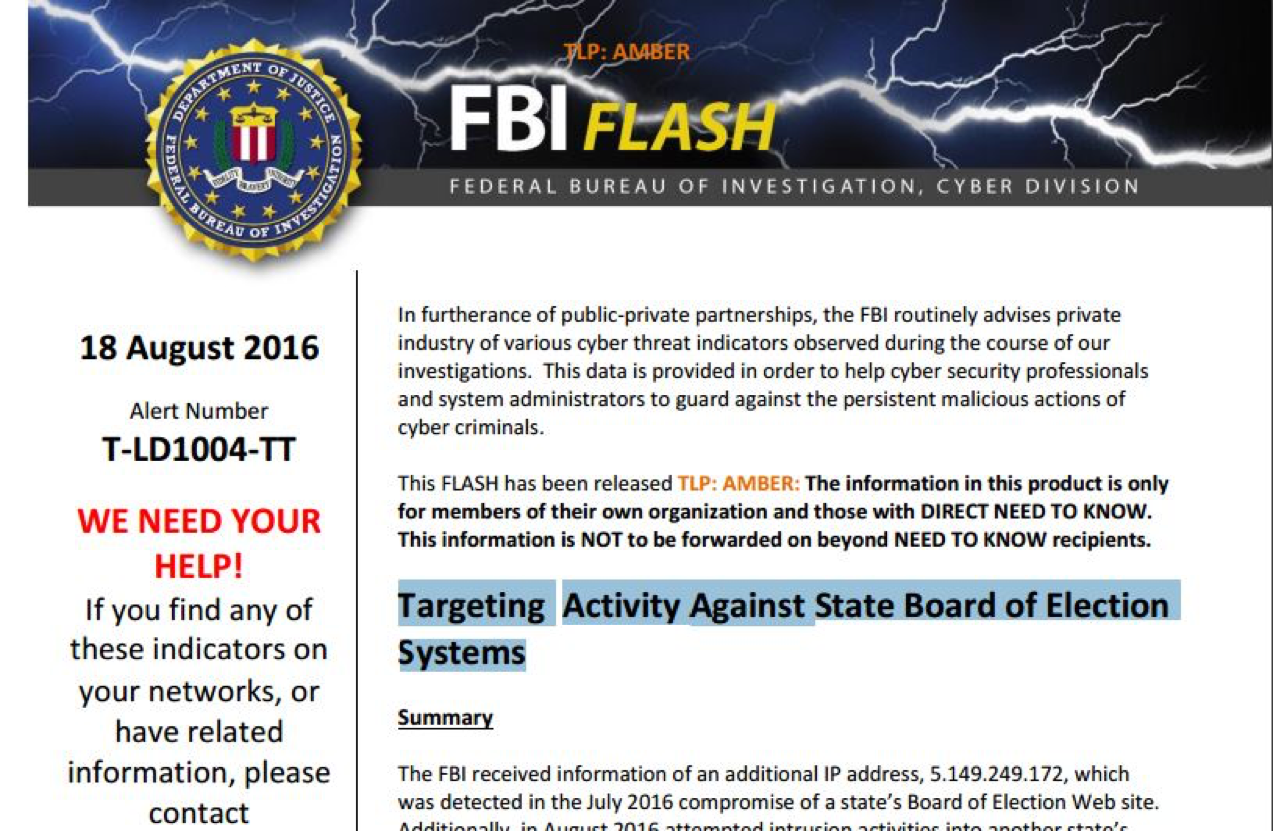 The FBI issued a “flash” alert to election officials across the country confirming that foreign hackers have compromised state election systems in two states.

The FBI confirmed that foreign hackers have penetrated state election systems, federal experts have uncovered evidence of the intrusion. The hackers penetrated the databases of two state election systems in the last weeks, in response, the FBI issued a “flash” alert to election officials across the country inviting them to adopt security measured to protect their computer systems.

“The FBI warning, contained in a “flash” alert from the FBI’s Cyber Division, a copy of which was obtained by Yahoo News, comes amid heightened concerns among U.S. intelligence officials about the possibility of cyberintrusions, potentially by Russian state-sponsored hackers, aimed at disrupting the November elections.” reported Yahoo News that obtained a copy of the “flash” alert.

The alert does not provide details about the states that suffered the attacks, but according to Yahoo News, sources familiar with the document say it refers voter registration databases in Arizona and Illinois.

US authorities fear possible cyber attacks launched by nation-state actors like Russians that could have serious consequences on the result of the next Presidential Election.

The Homeland Security Secretary Jeh Johnson had a conference call with state election officials on Aug. 15 to offer all the necessary support to secure state election systems.

The DHS will provide cybersecurity experts to scan the voting systems searching for vulnerabilities that could be exploited by hackers.

“The government is offering to help states protect the Nov. 8 U.S. election from hacking or other tampering, in the face of allegations by Republican Party presidential candidate Donald Trump that the system is open to fraud.” reported the Reuters.

“Homeland Security Secretary Jeh Johnson told state officials in a phone call on Monday that federal cyber security experts could scan for vulnerabilities in voting systems and provide other resources to help protect against infiltration, his office said in a statement.”

Back to the FBI flash alert, titled “Targeting Activity Against State Board of Election Systems,” it was labeled as restricted for “NEED TO KNOW recipients.”

The warning confirms that the bureau was investigating cyber intrusions against two state election websites that occurred recently that lead to the exfiltration of voter registration data.

The FBI alert contains technical details about the attacks, including IP addresses involved in the both attacks.

“The FBI is requesting that states contact their Board of Elections and determine if any similar activity to their logs, both inbound and outbound, has been detected,” the alert reads. “Attempts should not be made to touch or ping the IP addresses directly.”

The TTPs adopted by attackers suggest the involvement of Russian hackers, one of the IP addresses included in the alert has surfaced before in Russian criminal underground hacker forums.

Menzel, the Illinois election official, confirmed that the FBI is investigating a possible link to the Democratic National Committee hack and the attacks against the two state election systems.