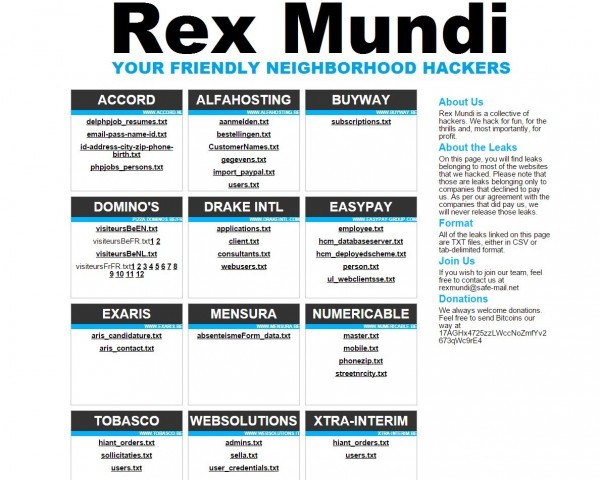 Europol dismantled the Rex Mundi hacker crew, it arrested another member of the gang

The Europol announced that several French nationals were arrested in the past year on suspicion of being involved with notorious Rex Mundi crime gang.

Another success of the Europol made the headlines, the European police announced that several French nationals were arrested in the past year on suspicion of being involved with notorious hacker group known as Rex Mundi (“King of the World”).

The Rex Mundi crime group has been active since at least 2012. it hacked into the systems of several organizations worldwide and attempted to blackmail them.

The hackers used to steal sensitive information from the victims, then they demanded fees for not disclosing the stolen data.

The operation coordinated by the Europol was launched in May 2017 after the group targeted a UK-based company. Crooks stole significant amounts of customer data from the company, then attempted to blackmail it by demanding the payment of a bitcoin ransom of nearly €580,000 ($670,000) for not disclosing the incident. The group also requested more than €825,000 ($776,000) for details on the hack.

“A 25-year-old coder was arrested on 18 May by the Royal Thai Police based on a French international arrest warrant. The arrest of this young cybercriminal was the eight in an international operation supported by Europol and the Joint Cybercrime Action Taskforce (J-CAT)  that started exactly one year ago.” reads the announcement published by the Europol.

“In May 2017 a British-based company was the victim of a cyber-attack during which a large amount of customer data was compromised. The attack was immediately claimed by an organisationcalled Rex Mundi.”

After the victim reported the incident to the authorities, the UK’s Metropolitan Police, the French National Police and Europol launched a joint operation that lead to the identification of a French national.

“Within an hour, Europol’s 24/7 Operational Centre was able to link the available information to a French national,” continues the Europol.

All of the suspects are French nationals and they were all arrested by French police, except for the last arrest, which took place in Thailand.

The last member of the crew is a 25-year-old developer that was arrested last month by the Royal Thai Police.

The leader of the Rex Mundi group admitted blackmailing the company but claimed to have hired hackers on the Dark Web to hack the victims.