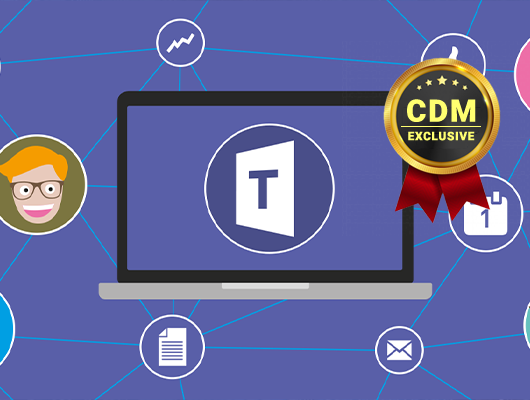 Do Not Forget to Securely Lock Your Data in Microsoft Teams

More and more employees work from home. As a result, in the last months the demand for Microsoft products, especially Microsoft Teams, has increased. Therefore, in many companies and organizations, a large amount of business data travels back and forth across different teams and channels in Microsoft Teams every day. This data must be protected just as reliably as all other data used in the company.

Up until now, it has not been possible to protect data with end-to-end encryption directly in Microsoft Teams. The German encryption software Boxcryptor offers a solution to this privacy concern.

In the following, we will explain why you should use end-to-end encryption to protect your data. We will show you what the Microsoft Teams integration of the encryption software Boxcryptor looks like.

Video files, audio files, information that you share while chatting or in private messages, and files that you store privately for yourself or for common collaboration in a project group — there is a lot of data that accumulates during the daily use of Microsoft Teams.

All of this data is encrypted by Microsoft, both in transit between different devices, users, or data centers and at rest, with standard technologies.

Microsoft offers to encrypt your data, but that is exactly why Microsoft also remains in possession of the keys to your data. This enables Microsoft to access all data stored and used in Microsoft Teams in plain text. Theoretically, Microsoft employees with bad intentions could access sensitive company data. Apart from that, Microsoft might be forced by authorities on the basis of laws such as the CLOUD Act to provide access to sensible data. Companies that want to store their data according to the zero-knowledge principle have only one choice; they must apply for additional protection. Zero-knowledge encryption does not allow anyone except the owner of the data and authorized teams in an organization to access the data in plain text. Files are already encrypted on the user’s end device before being uploaded to the cloud. So “readable” data never leaves your device.

The Boxcryptor App — Features and Functions

The encryption solution Boxcryptor offers end-to-end encryption based on a combination of AES-256 and RSA. It has been on the security market for almost ten years. Since July 2020, the software solution is available as an integration in Microsoft Teams, to Boxcryptor Company and Enterprise customers.

Through end-to-end encryption, your data is protected from prying eyes. Nobody can access the data; neither Boxcryptor, nor Microsoft, or any other third party.

The software is cross-cloud, which makes it well suited for a multi-cloud strategy. In total, Boxcryptor supports more than 30 cloud solutions besides OneDrive and SharePoint. NAS systems and local data can be encrypted as well.

Boxcryptor can be directly integrated into Microsoft Teams, similar to other apps. The combination of Boxcryptor and Microsoft Teams offers a user-friendly surface for secure and efficient collaboration in teams and companies.

Companies can use the app in Microsoft Teams in three different ways. First, as a so-called “Channel App” in channels of different teams. Second, as a “Personal App” for the user’s individual data. Third, employees can share encrypted files with their team directly in the chat area of a channel.

Bevor first usage company administrators have to download the Boxcryptor app on the website www.boxcryptor.com/en/microsoft-teams/. Soon it will be also possible to install the app via Microsoft AppStore. 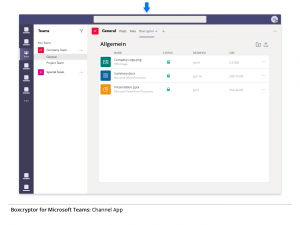 You can easily integrate Boxcryptor into a channel in your team through adding a new app in the selected Team Channel by clicking on the “+” symbol on the horizontal menu bar. After successful sign-in, the Boxcryptor folder will be displayed as a new tab.

The permission to view the files in the new encrypted folder is initially held exclusively by the person who creates the folder. Other people must first obtain permission before they can access files. 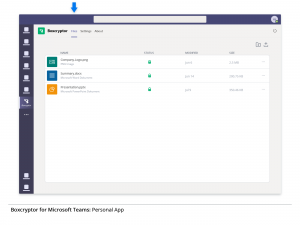 Boxcryptor’s personal app gives team members the option to store encrypted data in their private OneDrive folder. This app is for data that is not supposed to be shared with the whole team. Integrate the app by clicking “more apps” in the left, vertical menu bar. Afterward, the app will be pinned on the vertical personal menu bar in Microsoft Teams. 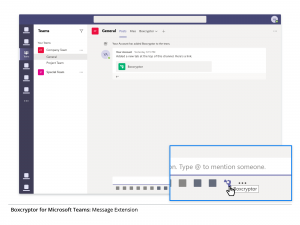 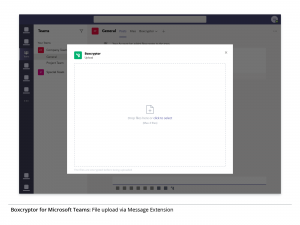 As soon as Boxcryptor has been added to a Microsoft Teams channel, there is another feature available in the “Posts” tab of your channel: You are able to share encrypted files with the entire team, by selecting the Boxcryptor logo below the team conversation. You can upload up to four encrypted files of your choice. Anyone who has Boxcryptor authorization in the channel can open the file which is now displayed as a post, and read it in plain text.

A glance into the future

There are still limitations if you want to protect your data in every possible scenario in Microsoft Teams. For example, it is not yet possible to encrypt data end-to-end in a private channel or the individual and group chats. Also, Boxcryptor only supports the Microsoft Teams client apps and not yet the browser application. The long-term ambition is an application that gives companies the ability to encrypt business data in any Microsoft Teams application scenario without having to give away the key to their own data. 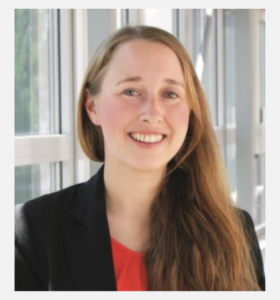 Johanna Reisacher is a Marketing Manager at Boxcryptor | Secomba GmbH.  After five years of working for an IT publishing house, she has joined the team of Secomba GmbH in March 2020. Johanna can be reached online at https://www.linkedin.com/in/johanna-reisacher/ and at our company website https://www.boxcryptor.com/.