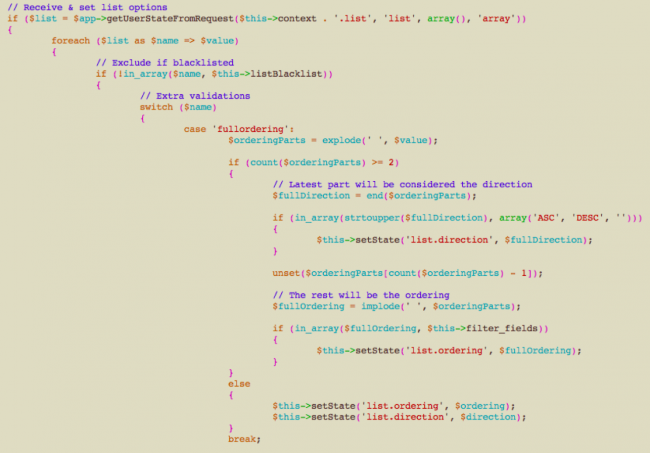 Joomla maintainers released a fix for a critical SQL injection flaw, tracked as CVE-2017-8917, that can be exploited by a remote attacker to hijack websites

On Wednesday Joomla maintainers released a fix for a critical SQL injection vulnerability, tracked as CVE-2017-8917, that can be easily exploited by a remote attacker to obtain sensitive data and hijack websites.

The vulnerability was reported by the Sucuri researcher Marc-Alexandre Montpas, it only affects Joomla 3.7.0 because it’s related to a new component introduced in this version.

“The vulnerability is caused by a new component, com_fields, which was introduced in version 3.7. If you use this version, you are affected and should update as soon as possible. This vulnerable component is publicly accessible, which means this issue can be exploited by any malicious individual visiting your site.” reads the analysis published by Sucuri.

“Given the nature of SQL Injection attacks, there are many ways an attacker could cause harm – examples include leaking password hashes and hijacking a logged-in user’s session (the latter results in a full site compromise if an administrator session is stolen).”

According to Montpas, the vulnerability only affects Joomla 3.7 because it’s related to the new com_fields component introduced in this version. The component borrows views from an admin-side component that has the same name, unfortunately, it is a publicly accessible component, this means that anyone can exploit the CVE-2017-8917 vulnerability without needing a privileged account on the vulnerable website. An attacker can leverage the flaw to inject nested SQL queries via a specially crafted URL.

Joomla users have been advised to update their installations to the version 3.7.1.

Sucuri has published the technical details for the CVE-2017-8917 vulnerability, it is likely that threat actors in the wild will start exploiting it in the next weeks.

“The only administrator view that can be accessed is fields – and this will grab its data from an admin-side model (due to the $config[‘base_path’] trick we discussed earlier). In this case, the vulnerability we discovered was located in the FieldsModelFields model, in ./administrator/components/com_fields/models/fields.php.” reads the analysis. “So in order to exploit this vulnerability, all an attacker has to do is  add the proper parameters to the URL in order to inject nested SQL queries.”

Massive attacks on Joomla installations are dangerous events, in October 2016 Joomla released the version 3.6.4 to fix two high severity vulnerabilities, CVE-2016-8870, and CVE-2016-8869. A combination of these flaws can be exploited to upload a backdoor and gain complete control of vulnerable Joomla websites.

Experts from the firm Sucuri observed a spike in the number of attacks in less than 24 hours after Joomla released patches the above critical flaws.