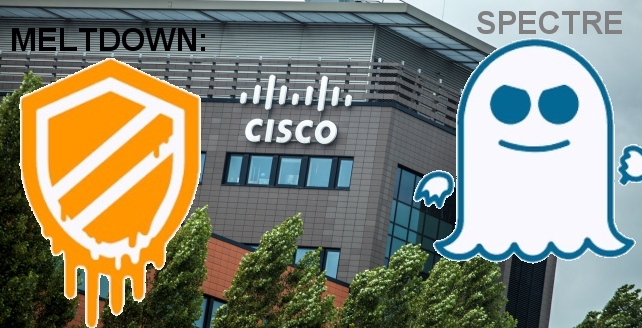 Cisco is going to release security patches for Meltdown and Spectre attacks, the company is currently investigating its entire products portfolio.

Cisco published a security advisory on the CPU Side-Channel information disclosure vulnerabilities that are exploited in the Spectre and Meltdown attacks and announced it is going to release security updates to protect its customers.

Switchzilla announced it will release software updates that address these flaws.

In a statement, Cisco highlighted that the majority of its products are closed systems, this means that it is impossible for an attacker to run custom code on the device. However, the company confirmed that the underlying CPU and OS combination in some products could open the devices to the attacks.

According to Cisco, only devices that allow the customer to execute their customized code side-by-side with the Cisco code on the same microprocessor are at risk.

Let’s consider for example the case of a Cisco product running on a virtualized environment, if the virtual machine is vulnerable the overall system is exposed to the attacks.

“A Cisco product that may be deployed as a virtual machine or a container, even while not being directly affected by any of these vulnerabilities, could be targeted by such attacks if the hosting environment is vulnerable.” continues the advisory.

“Cisco recommends customers harden their virtual environment and to ensure that all security updates are installed.”

The company is currently investigating its product portfolio searching for vulnerable devices.