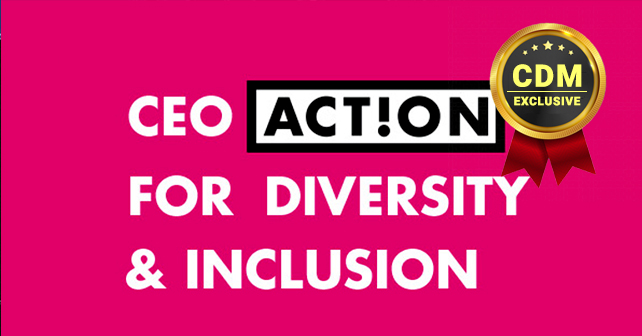 CEO Action for Diversity & Inclusion™ Coalition is Trailblazing the Path to Workplace Integration!

Las Vegas, NV – Issues of prejudice and bias in the workplace are making headlines
across the country. The national discourse on these topics are reaching a fever pitch,
and with the stakes climbing to ever-increasing levels, corporate leadership is
struggling to find ways to address these critical issues in an effective, sensitive, and
most importantly, constructive manner.

The CEO Action for Diversity & Inclusion coalition aims to rally the business
community to advance diversity and inclusion within the workplace by working
collectively across organizations and sectors. “We have over 900 [CEO’s, senior 1
executives and Deans of academic institutions] now, and that’s after about three
years of existence,” according to Dave Bryant, senior manager of external
communications at PwC. “The majority of them fall under the Fortune 1000
threshold.”

The CEO Action coalition addresses one of the most crucial hindrances to the
progression of workplace integration by creating a safe environment for corporate
leaders to communicate openly about concerns relating to the delicate subject matter.
“What makes CEO Action appealing to signatories [members] is that we don’t record
anything,” Bryant explains. “Our CEO’s sign on to cultivate a trusting workplace so
that we can have those good conversations about diversity and inclusion, which is
just inherently a difficult thing to talk about, especially in a professional setting.”

CEO Action is the brainchild of Tim Ryan, US chair and senior partner of PwC . When
Ryan took the reins in 2016, it was in the midst of a tumultuous time for race
relations in this country. He recognized an opportunity for business leaders to
influence corporate culture by bringing diversity and inclusion conversations to the
forefront. So on June 12, 2017, CEO Action for Diversity & Inclusion™ was
collectively formed and is now led by a steering committee of CEOs and leaders from
Accenture, BCG, Deloitte US, The Executive Leadership Council, EY, General Atlantic,
KPMG, New York Life, P&G, and PwC. Tim Ryan then requested that PwC donate
$10million to the initiative, which the company obliged.

After three years, some valuable insights have surfaced from the CEO Action
network. “It’s very surprising to me, as somebody who is not professionally trained
in the diversity space, to see how many very successful companies actually don’t
have a Diversity Program in place,” Bryant says. One of the problems, it seems, is a
shortage of meaningful resources for senior corporate leaders to tap into for help on
these issues. “There’s a lot of resource-sharing going on, and CEO Action maintains a
library of all this [material] too.”

More than just a safe environment for idea exchange and resources, CEO Action
conducts several events, both internal- and external-facing, to further its mission.
Bryant explains, “We have our annual CEO Closed-Door Summit, which brings [our
members] into a room with the door shut, and then they’re with peers, and they can
have open and honest conversations without fear of retribution from subordinates.”

CEO Action also conducts events and workshops focused on building awareness
through a variety of tools and techniques, to elicit action-oriented solutions, and
curb procrastination. “I think, at this point, education is something that needs to
happen,” Bryant says. “If you can educate people and let people understand what it
is from an academic perspective and provide statistics, provide data to let people
understand that this is something that’s real… it’s not made-up!”

There are still more activities in store for 2020. In February, CEO Action will
spearhead a program called the Day of Understanding, which will actually be a
month-long, in order to facilitate as many schedules as possible, and maximize
reach. “The point is to have our signatories dedicate a day in their entire companies
to educate, train, and host open door sessions, and just have people talk about this,
because if you can sit down and talk about this in a professional setting, then that
opens the doors to so many other possibilities from a diversity/inclusion
perspective.” Bryant concludes, “If you’re in the Diversity space, you need to educate
your organization.”

Gary Berman, Cybersecurity Reporter
Cyber Defense Magazine
Gary Berman is a contributing reporter for Cyber Defense Magazine. He was the
victim of a series of insider hacks for several years until he made the pivot from
victim to advocate. He is creator and CEO of The CyberHero Adventures: Defenders of
the Digital Universe , a groundbreaking comic series that distills complex
cybersecurity information into entertaining and educational superhero stories,
making cyber hygiene accessible for non-technical people.