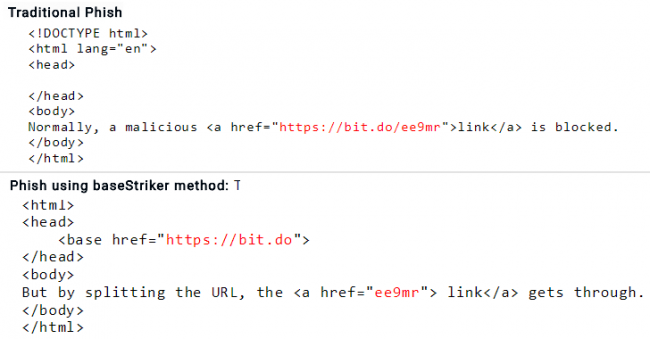 The baseStriker attack technique allows to bypass anti-phishing filters by splitting and disguising a malicious link using a tag called the <base> URL tag.

Security researchers at cloud security company Avanan have discovered a technique, dubbed baseStriker,used by threat actors in the wild to bypass the Safe Links security feature of Microsoft Office 365.

The Safe Links feature is designed by Microsoft to protect Office users from malicious codes and phishing attacks, it is part of Microsoft’s Advanced Threat Protection (ATP).

Beginning in late October 2017, ATP Safe Links protection is being extended to apply to web addresses (URLs) in email as well as URLs in Office 365 ProPlus documents, such as Word, Excel, PowerPoint on Windows, iOS, and Android devices, and Visio files on Windows.

The security feature works by replacing all URLs in an incoming email with Microsoft-owned secure URLs.

When the user clicks on a link included in an incoming email, it first redirects the user to a domain operated by Microsoft to checks the original URL for anything suspicious. If the scan detect a suspicious activity, it then warns users, otherwise, the user is redirected to the original link.

BaseStriker attack technique leverages the <base> URL tag in the header of an HTML email to split and disguise a malicious link.

“The name baseStriker refers to the method hackers use to take advantage of this vulnerability: splitting and disguising a malicious link using a tag called the <base> URL tag.” reads the analysispublished by Avanan.

“The attack sends a malicious link, that would ordinarily be blocked by Microsoft, past their security filters by splitting the URL into two snippets of HTML: a base tag and a regular href tag. Here’s a short video showing how it works:”

The following image shows a traditional phishing link that is blocked by the filter because the URL is classified as malicious and a link that is split using the BaseStriker attack technique.

Tests of the baseStriker attack technique demonstrated that Office 365 users are vulnerable.

Gmail users and users protecting their Office 365 with Mimecast are not vulnerable to the attack, meanwhile, Proofpoint is affected by the issue.

Security experts confirmed that hackers are already using the baseStriker attack to conduct phishing campaigns, they warn the technique could be exploited to distribute  malware.

Avanan reported the baseStriker attack technique to both Microsoft and Proofpoint last weekend, but currently, no patch is available.

“As of the time of writing, there still is no fix so there’s no configuration you can make in your Office 365. We have notified Microsoft and Proofpoint and will update if we learn more.” concluded Avanan.

“Because this vulnerability is already known to hackers, an immediate first step would be to notify your end-users and reinforce the risk of phishing attacks.”