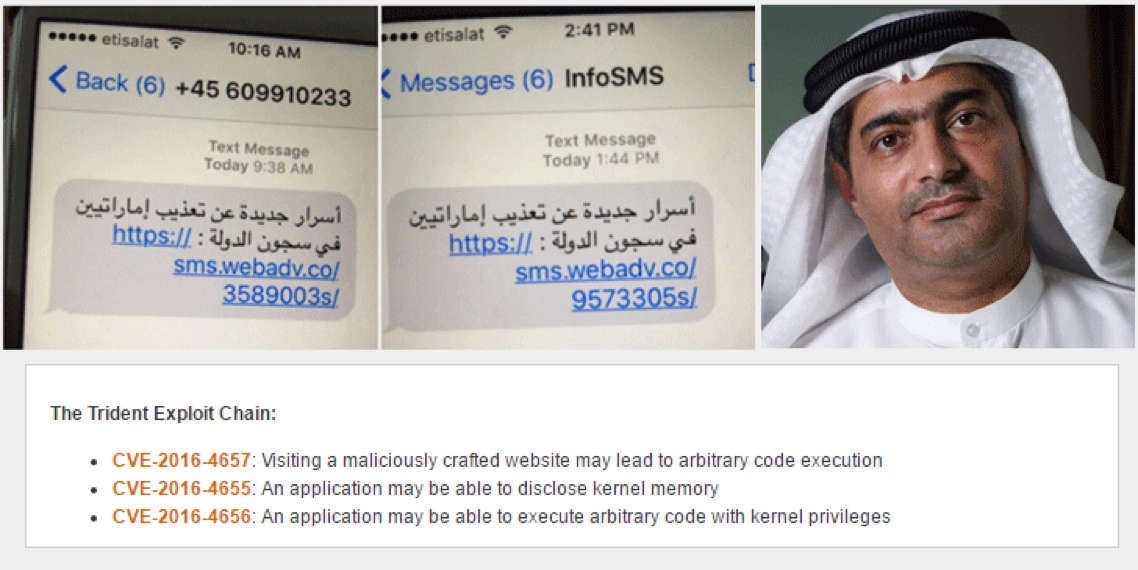 Apple has released the iOS 9.3.5 update for its mobile devices (iPhones and iPads). The security updates address three zero-day vulnerabilities exploited by nation-state actors to spy on activists. Security experts have spotted a strain of spyware targeting the iPhone used by a notorious UAE human rights defender, Ahmed Mansoor.

Apple labeled the update “important,” inviting users to update their devices to protect them from malicious codes that exploit the three flaws.

Malware researchers believe that the Israeli surveillance NSO Group has developed a malware that has been exploiting three zero-day security vulnerabilities in order to spy on dissidents and journalists.

Apple has patched the three vulnerabilities just ten days after the security experts from Citizen Lab and Lookout reported them to the company.

Experts from Lookout identified the targeted attack as Pegasus as explained in a detailed blog post.

“Pegasus is the most sophisticated attack we’ve seen on any endpoint because it takes advantage of how integrated mobile devices are in our lives and the combination of features only available on mobile — always connected (WiFi, 3G/4G), voice communications, camera, email, messaging, GPS, passwords, and contact lists. It is modular to allow for customization and uses strong encryption to evade detection.” states the blog post published by Lookout., the three zero-day flaws, dubbed ”

The three zero-day vulnerabilities, dubbed “Trident,” exploited in the attack are:

Mansoor, who won the ‘Martin Ennals Award’ in the United Arab Emirates, received a text message on his iPhone on August 10. The message was sent from an unknown number.

Mansoor found the message very suspicious and forwarded the message to Bill Marczak, researcher at the Citizen Lab that conducted a joint investigation with mobile security firm Lookout.

The message embedded a link to a high-sophisticated spyware the was designer to exploit the flaws fixed by Apple.