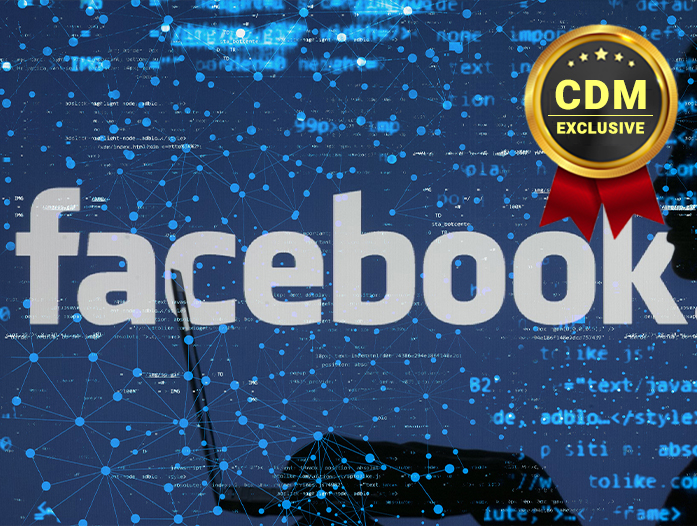 The level of trust in Facebook versus the government also varies between demographic groups.

In today’s ever-changing data-driven society, it’s a challenge for data regulations to keep up with the speed of technological advances. But as data breaches and cyberattacks increasingly threaten online privacy around the world, it’s now more crucial than ever for countries to strengthen cyber defenses to protect citizens’ data.

While Europe sets the global data privacy standards with its General Data Protection Regulation, the US is still catching up.

In America, personal data is a valuable asset, and much of it falls into the hands of big tech companies — like Facebook — and the government, both of which have been scrutinized in the past for questionable data handling practices.

With these powerful organizations harnessing so many people’s information, it evokes the question: Who can Americans trust more, the government or Facebook?

An independent study conducted by Privacy Tiger with over 1,000 US participants found this: despite Facebook’s fair share of data privacy issues, about 32% of Americans still trust the tech company over the government with their personal data.

Trust in the US government has fluctuated over the last four decades, but the overall declining trend is evident. As of recent years, 83% of Americans don’t trust the government to do what’s right, according to a Pew Research Center study. 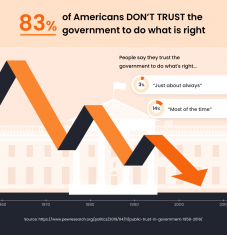 This lack of trust in the government also extends to cybersecurity issues. Another Pew Research study found that while a majority of Americans have personally experienced a data breach, many of them don’t trust the government nor social media platforms to protect their data.

Roughly half of Americans feel that their data has become less secure over the last five years. Their concerns are reasonable, given that the US has experienced the most cases of significant cyber attacks over the last decade compared to other countries, and as a result, also spends the most on data breach responses.

It’s also alarming that the government is one of the sectors most susceptible to data breaches — the others being retail and technology — as this means the current cybersecurity measures aren’t enough to protect citizens’ data.

This makes government data breaches all the more detrimental as it can affect millions of citizens. For instance, the 2015 hacking of the US Office of Personnel Management (OPM) compromised the sensitive personal information of over 22 million people, including federal employees and their friends and family.

The cyberattack was the result of the OPM’s failure to “prioritize cybersecurity and adequately secure high value data,” stated a report by the Committee on Oversight and Reform. The damages could have been prevented or significantly reduced had the OPM implemented “basic, required security controls” after encountering initial breaches in 2014.

The review found that seven of the eight government agencies failed to provide adequate protection for personally identifiable information, and all eight agencies used outdated legacy systems and failed to apply security patches in a timely manner.

And although there seems to be less public awareness when it comes to the government’s cybersecurity issues compared to Facebook’s privacy scandals, which are often in the limelight, the fact that a third of Americans would still place higher trust in the tech company speaks to their lack of faith in the governing bodies.

Privacy Tiger’s study also found that the level of trust in Facebook versus the government varied between demographic groups. 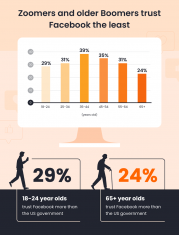 The Boomers’ lack of trust in Facebook may be derived from their skepticism of social media in general, as a majority of older Americans feel that their personal information has become less safe in recent years.

Zoomers, on the other hand, are leaving Facebook for newer social media platforms like Instagram and Tik Tok. The younger, tech-savvy generation is also likely to be aware of Facebook’s privacy problems, notably the Cambridge Analytica scandal and the record-breaking $5 billion penalty from the Federal Trade Commission for deceptive privacy practices.

To re-establish trust with users young and old, Facebook would have to change its manipulative advertising tactics and be transparent about its data handling practices.

Data also showed that women were 74% more likely than men to trust Facebook over the US government. 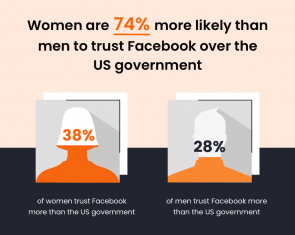 This could be because women make up the bigger Facebook demographic and engage more actively on social media.

On the flip side, women’s distrust of the government could stem from the overall lack of active female voices in the government. As of 2020, women hold about a quarter of the seats in Congress, and less than a third of the statewide elective executive office positions.

The juxtapositions between women’s prominence on social media and their underwhelming presence in elective office might account for why women are more likely to trust Facebook with their personal information over the government.

When looking at regional differences, data showed that Southerners were the least likely to trust the federal government with their data. 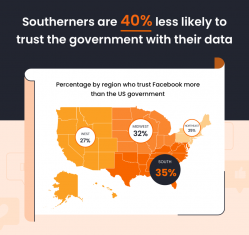 While it’s unclear if historical events or political biases play a part in Southerners’ distrust, it’s clear that trust in the government is fractured across the country, and Facebook is part of the problem.

The social media platform has become a medium for the spread of misinformation and targeted political ads in recent years, adding instability and uncertainty to the political environment.

Overall, findings from Privacy Tiger’s study suggest that data privacy is currently not prioritized in America as much as it should be. Previous examples of the government’s questionable data handling practices also illustrate this point.

For instance, a recent report revealed that FBI investigators used provisions in the Patriot Act to collect users’ website visit logs in 2019, which is faintly reminiscent of the NSA’s monitoring of citizens’ phone records back in 2013.

To regain the public’s trust, both private and public institutions have to implement adequate data protection measures and be transparent about their data handling practices.

Without any federal data privacy legislation, it’s up to state and sector-specific regulations to upkeep data privacy standards. The California Consumer Privacy Act, lauded as the “GDPR Lite,” is a good start, but it still doesn’t have the power to keep all US businesses in check, much less the government.

Nevertheless, there are opportunities for change. Experts say they expect that there will be greater focus on cybersecurity and tech policies under the Biden administration, especially in bringing about the beginnings of a national data policy, and implementing a new layered approach to cybersecurity.

Going forward, it’ll be up to government agencies and corporations to take the lead in reforming cybersecurity and data handling practices so they can create a safe and secure online environment for all citizens. 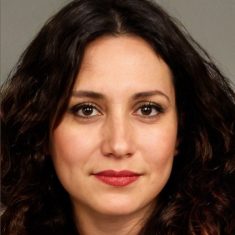 Kathryn Robinson is a privacy expert for Privacy Tiger. She writes about compliance trends and best business practices for websites, apps, and companies in the US and EU.