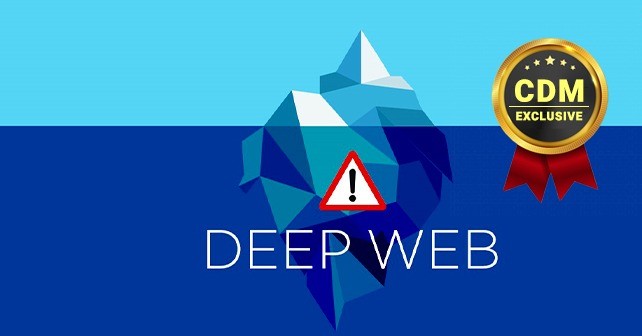 A Dive into the Dark World of the Internet

What is the Deep Web & Dark Web?

For the majority of us, the Internet is limited to a mere ten, twenty or at most fifty websites. All of our daily content revolves around that handful of websites and in some philosophical way that is our world. However, in reality, the Internet is enormous with around 1 billion websites that are hosted on various servers all around the world.

The growing notion within the tech world is that we as users only see the tip of the iceberg and according to researchers, only 4% of the Internet is visible to the general public. This leads to the introduction of terms such as the Deep Web, Dark Internet, and the Darknet, which tend to showcase the presence of the hidden part of the internet which many people are unaware of.

Due to the lack of understanding of the topic, those who know about the deep web, confuse it with the dark Internet or dark web and vice-versa. However, the truth is, the three of them are completely different and a deep-dive into these concepts with an element of nuance reveals how.

Metaphorically speaking, the entire internet is like an ocean, where the World Wide Web is the surface of the ocean where people may find broken beer bottles and certain kinds of living organisms, the Deep Web is the place where explorers haven’t been, and finally the Dark Web is the absolute bottom of the ocean (Kingdom of Hades).

Figure 1: The composition of the Web.

But what does all of this mean?

The Deep Web
Extending the analogy, as technology has advanced, humans have become capable of going into the depths of the ocean. As such, the search engine crawlers act as explorers that grab whatever they find close to the surface of the waters.

For example, the explorers could find the shipwreck but there is still a lot to discover the deeper you go. Thus, the Surface Web is everything within the grasp of the crawlers while the Deep Web is the part of the Internet where search engine crawlers cannot muscle their reach.

To put it all together, if a person uses an online bank account then the password-protected bits are accessible on the Deep Web.

The Deep Web includes all user databases, web forums, pages behind paywalls and even the Dark Web.

To bring it into perspective, for every page available on a website there is another of it on the Deep Web. There are huge numbers of such pages, most of them exist for mundane reasons and that should help people understand the sheer size of the Deep Web.

The Dark Internet
Confusingly, the ‘Dark Internet’ is another term that gets thrown around a lot, to explain websites that cannot be reached by a typical user. In reality, the Dark Internet is a boring place where researchers store raw data.

The Dark Web
Contrary to the other two terms, the Dark Web is better known to people.

The Dark Web become worldwide news in August 2015 after it was reported that 10GB of data stolen from Ashley Madison, a site designed to enable bored spouses to cheat on their partners, was dumped onto the Dark Web.

It was reported that hackers stole the data and threatened to upload it on the web if the site did not decide to close down.

Now, spouses of Ashley Madison users have been blackmailed to pay $2500 in Bitcoin or have the identity and activities be exposed.

The dark web works just about the same as the regular internet: it uses the same TCP/IP framework to transmit HTTP and FTP traffic within and between networks that carry regular internet traffic. Content on the dark web consists of HTML webpages similar to the rest of the web.

In technical terms, it is an encrypted network that is built on top of the existing internet that provides anonymity to users when accessing specific web pages.

The dark web is a part of the World Wide Web that is composed of a variety of anonymous networks, online activity, and non-referenced domains. It cannot be reached using traditional search engines or visited by using traditional browsers but can be only be browsed anonymously with the help of special software.

This is because content on the dark web is hosted on overlay networks, which uses a complete, but fundamentally different, network addressing system than the web addresses most of us know and use.

F2F (Friend-to-Friend) networks are the most basic kind of darknet, wherein two familiar people communicate with each other directly over the Internet. This does to ensure that the users want to share some files over a P2P (Peer to Peer) these networks are not accessible by other people can be encrypted or password protected.

However, TOR is the most popular darknet tool, and in order to enter the Tor’s network, a Tor browser is required. Tor can even be used to visit normal websites as well, but its main purpose is to access services which can’t be accessed on the regular Internet.

Hidden services account for only 1.5% of the Tor network volume. But the overwhelming majority of resources requested over Tor hidden services (around 80% of the traffic) are requested from child abuse sites.

TOR was created by US military researchers in order to exchange intelligence information anonymously.

Later on, the reason that Uncle Sam released it to the public was to obfuscate the source of its attacks, to infiltrate civil rights movements, and to enable its spies to communicate intelligence securely and effectively, which is a fancy of saying that they needed to create noise that would thereby aid them in hiding their own messages.

In a nutshell, the government needed to give up power to maintain power.

So how does one access the Dark Web?
Accessing the Dark Web is not a difficult process. A user simply needs to install and use the TOR browser. After installing the bundle and the other required tools the browser is ready to start.

Just as the end user’s IP address is bounced through several layers of encryption to appear to be at another IP address on the Tor network, so is that of the website. Instead of being made up of sites that link to each other, allowing people to easily jump from page to page, the dark web is more like a collection of self-contained silos, for example, AlphaBay (similar to Amazon).

Thus, sites on the Dark Web can be visited by anyone, but it is very difficult to work out who is behind the sites. And it can be dangerous if you slip up and your identity is discovered.

The Notorious Silk Road
Not all Dark Web sites use TOR, some useful services such as I2P (Invisible Internet Project), but yet the principle remains the same. An infamous example is the Silk Road and the Silk Road Reloaded (No Dark Web conversation can ever be complete without mentioning Silk Road).

For a long time, the Silk Road was the biggest game in darknet commerce as it allowed users to sell a great many illegal things, and inspired a number of similarly designed counterfeit markets.

Silk Road was selling stolen credit and debit card numbers, fake IDs, counterfeit currencies, recreational drugs, hacking tools and login credentials for hacked accounts. Transactions there were conducted in bitcoins and other virtual currency, and then goods were shipped through the mail.

However, in October 2013, the FBI shut down the website and arrested Ross William Ulbricht under charges of being the site’s pseudonymous founder. On 6 November 2013, Silk Road 2.0 came online, run by former administrators of Silk Road and it too was shut down.

Recently, Silk Road Reloaded has sprung up and comes with multiple cryptocurrency support and similar listing restrictions to the original Silk Road market. The media spotlight has impinged on the Silk Road’s relative obscurity, minimizing its value as a black marketplace.

This closed service comes with own set of pros and cons.

CONCLUSION
The Dark Web then is classified as a small portion of the Deep Web that has been intentionally hidden and is inaccessible through standard web browsers.

TOR’s anonymizing functions are critically important to people who rely on it to discuss sensitive topics but at the same time can be used by criminals for nefarious purposes.

Furthermore, the debate over how much illegal activity should be allowed to maintain Tor’s positive benefits is there a way to unmask illicit activity without compromising the security that makes the dark web work and how much light should be shone into the dark web is an ongoing topic of discussion.

Nevertheless, all I can say is, we are all fish, and it is in our hands to choose the kind of waters we want to swim in.

Sarosh Petkar is a BS/MS student of the RIT Computing Security department. He is currently pursuing his summer internship with Veritas in Mountain View, CA and has previously worked with Covermymeds in Columbus, OH. His interests include reverse engineering, network security and cryptography.
Sarosh Petkar can be reached online at sap6224@g.rit.edu