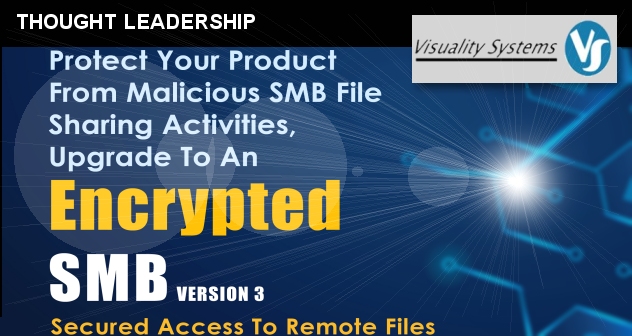 Upgrade to an Encrypted SMB version 3 – avoid the next WannaCry (which exploited SMBv1)
by Tal Widerman, Marketing Manager , Visuality Systems

Much has been said and written about the security threats posed by the SMBv1 protocol, and yet, as we look around in the middle  of 2018, the use of this protocol is still widespread. It is still not uncommon to find devices and applications using a protocol that is not only ancient, but also unsafe. Let’s take a quick look at some major reasons and recommendations that should convince anyone to stay away from this ancient version of SMB:

For years Microsoft has tried to prevent companies from implementing SMBv1 in new products and to upgrade older products to safer and newer SMB versions. In September 2016 the company had released an article titled “STOP USING SMB1”, and one year later became more active and disabled SMBv1 completely, starting with Windows 10 RS3.

In parallel, a shaming list was published of all companies that risk their users by using the SMBv1 protocol only and warning users to keep a foot away from these products. The WannaCry cyber-attack is a concrete proof of the risk potential and results of using SMBv1. As is well known, the WannaCry malware spread via SMBv1, first infecting one machine that would then propagate the malware to other at-risk boxes.

While Microsoft has been fighting to eliminate the SMBv1 protocol, the United States Department of Homeland Security has released an official warning to the public to disable SMBv1, and that the sooner it is done, the better.

The move to an updated SMB library is Inevitable as Microsoft will continue to release newer Windows versions with SMBv1 disabled (or even dropped completely), and sooner or later products with only SMBv1 will become simply unusable.

Visuality Systems SMB products support all SMB dialects up to the latest , encrypted SMB3.1.1 version. The chart below illustrates how different SMB versions speak to each other as of September 2017:

Visuality Systems’ NQ products are commercial, developed from scratch and come with support available round the clock. When you purchase from Visuality, you receive a product built on 20 years invested in SMB along with the backup of a professional and experienced SMB team. Visuality Systems also provides personal email and phone numbers of its engineers to ensure customers receive a quick response to any enquiry.

Tal Widerman is the director of Marketing at Visuality Systems located at 3 Hatamar St. Hi Tech Star Building, Yokneam Illit. Israel. 20692002. For years Tal has been active in the file sharing technology marketplace, managing licensing and partnerships of Visuality’s software and security libraries. He loves to study cyber security trends and was one of the first to take notice of how WannaCry exploited an easily fixed vulnerability.  Tal is responsible for Visuality Systems’ marketing activities since 2012. Tal holds an MBA from the Tel Aviv University International Business School majoring in Marketing.  Tal can be reached at tal@visualitynq.com and at Visaulity Systems company website www.visualitynq.com