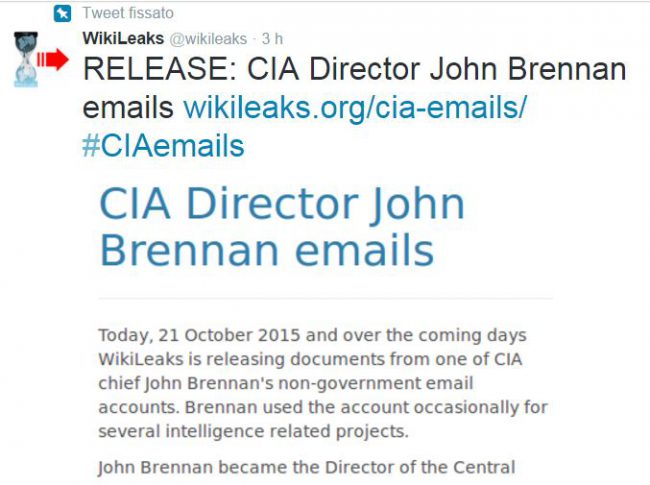 Wikileaks has obtained and immediately released the CIA Director John Brennan private emails. It is a first lot, others will be soon published.

A few days ago a teen has violated the CIA Director’s private email account and leaked sensitive files including a 47-page  Mr. Brennan’s application for top-secret security clearance.

The young hacker explained that he used the “social engineering” to convince employees at Verizon into providing the CIA Director’s personal information and exploiting the AOL into resetting his password.

According to the young hacker, whom identity is still secret, the private email account contained the Social Security numbers and personal information of more than a dozen top American intelligence officials, as well as a government messages related to the use of “harsh interrogation techniques” on terrorism suspects.

Now WikiLeaks, the non-profit, journalistic organisation, that publishes secret information and classified media from anonymous sources has obtained the contents of CIA Director John Brennan’s emails and published it online.

ANNOUNCE: We have obtained the contents of CIA Chief John Brennan’s email account and will be releasing it shortly.

The first lot of the CIA Director’s emails published by Wikileaks includes:

Draft: Intel Position Paper – Challenges for the US Intelligence Community in a post cold-war and post-9/11 world; a calling for inter-agency cooperation(PDF).

The Conundrum of Iran – Recommendations to the next President (assuming office in Jan. 2009) on how to play the figures on the U.S.-Iranian Chessboard(PDF)

Torture – Letter from Vice Chairman Bond, Senate Select Committee on Intelligence, to his fellow board members with a proposal on how to make future interrogation methods “compliant” and “legal”. Instead of listing all allowed methods, every kind of interrogation should be considered compliant, as long as it is not explicitly forbidden by the “Army Field Manual” (AFM). (May 2008) (PDF).

Torture Ways – A bill from July 2008 called “Limitations on Interrogation Techniques Act of 2008” explicitly list the forbidden interrogation techniques mentioned in the previous document and can be considered a direct implementation of the recommendations of Christopher Bond. (31 July 2008) (PDF)

Stay Tuned for further information and next releases of documents.

Over 3.2 billion emails and passwords hacked…find out if you are a victim and what to do about it… Does Sunburst Have Your Confidential Emails and Database Data? Avaddon ransomware gang shuts down their operations and releases decryption keys Kaseya releases patches for flaws exploited in massive ransomware supply-chain attack NATO releases its first strategy for Artificial Intelligence Key Business Lessons Learned from The SolarWinds Hack Why We Care About Cybersecurity Hygiene Securing Patient Private Information in The Age of Shared Information
October 23, 2015