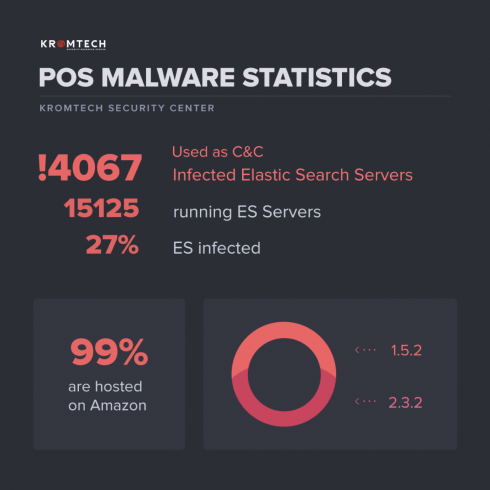 Security researchers from the firm Kromtech have discovered 4,000 compromised instances of open source analytics and search tool Elasticsearch that were running PoS malware.

According to Kromtech, this is just a portion of the overall number of compromised servers. Expert Bob Diachenko from Kromtech reported those servers are just 27 per cent of a total of 15,000 unsecured Elasticsearch installations discovered by the firm, and 99 per cent of the infected servers are hosted on Amazon AWS.

Amazon Web Services provides customers with a free T2 micro (EC2 / Elastic Compute Cloud) instance with up to 10 Gb of disk space, but clearly, customers are not able to properly secure the installs.

AWS offer only includes Elasticsearch versions 1.5.2 or 2.3.2, and unfortunately, users skip all security configuration during the quick installation process. Due to the poor settings are chosen by the operators, the malware is running with full administrative privilege on the compromised systems

“The Amazon hosting platform gives users the possibility to configure the ElasticSearch cluster just in few clicks, but usually, people skip all security configuration during the quick installation process. This is where a simple mistake can have big repercussions and in this case it did by exposing a massive amount of sensitive data.” wrote Diachenko.

“The lack of authentication allowed the installation of malware on the ElasticSearch servers. The public configuration allows the possibility of cyber criminals to manage the whole system with full administrative privileges. Once the malware is in place criminals could remotely access the server’s resources and even launch a code execution to steal or completely destroy any saved data the server contains.” continues Diachenko.

Below the key findings of the research conducted by Kromtech:

Sysadmins must urgently check their Elasticsearch installs, analyze the connections and traffic, and check the presence of the PoS malware. In case of compromised installs, they can provide the sample to Kromtech before reinstalling the systems and apply patches as required.