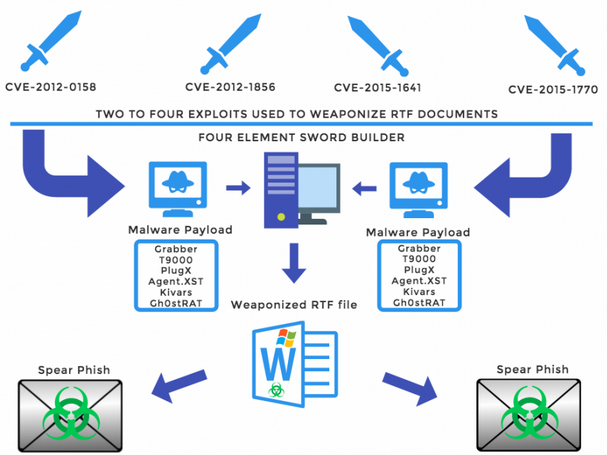 The researchers have analyzed a dozen attacks that leveraged on malicious Rich Text File (RTF) documents that were all created using the same builder which it has dubbed ‘Four Element Sword.’

The malware spreads via spear-phishing emails that came with malicious RTF documents in attachment. All the documents analyzed by Arbor Networks included code to exploit 2-4 vulnerabilities (CVE-2012-0158, CVE-2012-1856, CVE-2015-1641, CVE-2015-1770), the experts believe they were created by using the same builder.

“The Four Element Sword builder has been observed to utilize exploit code against four distinct vulnerabilities. Each malicious document created by the builder appears to leverage three or four of these vulnerabilities in the same RTF document, given a .DOC extension.” states the analysis published by Arbor Networks “Some targets may warrant the use of newer exploit code, while others running on dated equipment and operating systems may still fall victim to the older exploits.”

The nature of the targets and the techniques, tactics and procedures adopted by the threat actors lead the experts into belief the involvement of Chinese hackers.

The researchers at Arbor Networks also discovered that the Four Element Sword builder has been used by cyber criminal gangs in the wild, the details of these operations will be provided in future reports.