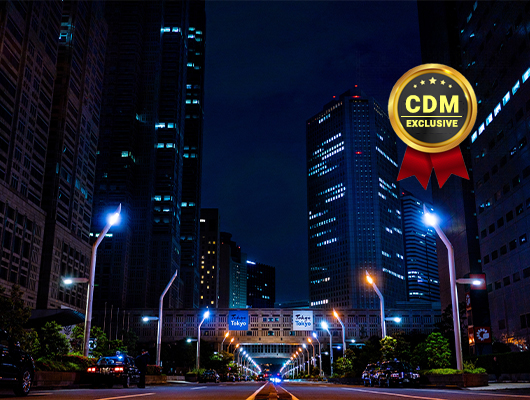 Smart cities are on the rise—in a really big way. According to Microsoft, smart-city initiatives—which can be defined as cities that rely on Internet of Things (IoT) sensors to obtain data that are then mined to guide management of city services and resources—account for nearly a quarter (23 percent) of the world’s IoT projects.

As the number of smart cities mushrooms, these hyperconnected urban areas are becoming increasingly critical to how seamlessly cities are able to operate. This is an important point to grasp since cities serve as the linchpin for most of the world’s data generation, as well as the majority of all energy consumption. What’s more, most of us live in cities. The UN reports that just over half (55 percent) of the world’s population makes a city their home—a figure that the UN predicts will rise significantly (close to 70 percent) in the next 30 years.

Here are some additional stats to impress upon you the importance of our urban areas in general, and smart city growth in particular:

It can feel overwhelming to consider the vast scope of the challenges that face today’s cities. Cities are charged with managing an ever-expanding laundry list of problems, including transportation, water and energy, public health, infrastructure, public safety, waste reduction, and more. As the current global pandemic and COVID-19 are showing, the high population and density of cities can quickly turn them into a hotbed of issues that require the best that technology can offer to aid communication and mitigate complexities.

To that end, studies have proven the value of edge computing and smart IoT edge devices, particularly when it comes to smart cities. A comprehensive survey on “Edge Computing Enabled Smart Cities” by Khan et al for the Institute of Electrical and Electronics Engineers (IEEE) stated that “it is evident from the literature that IoT is an integral part of smart cities. The next step is enabling the resource-intensive and strict latency IoT based smart city applications. Edge computing provides a promising way of enabling these applications by offering computation and storage resources with low latency.”

However, metropolises still have a significant issue to figure out—security—when leveraging the power of edge computing in smart cities. How can our global municipalities offer secure connectivity from their datacenters (as well as from the cloud) to the edge? The answer lies in the secure environment provided by software-defined perimeter (SDP) technology.

SDP software provides the needed security for smart IoT edge devices by creating a “zero trust” environment. This means edge devices don’t have full network access, but instead can only access the exact applications that the city’s IT department has authorized them to see, whether in the cloud or datacenter.

In other words, SDP allows for access at the application level only, not at the network level. As a result, lateral attacks are no longer a thing, and smart cities can enjoy the “secure by default” architecture that they require.

Other benefits for city IT staff include that SDP offers easy configuration and management, which aids scalability. The software requires no appliances and also avoids the various maintenance and security challenges of VPNs, which were designed for a physical server environment. SDP has performance advantages as well, with the encrypted micro-tunnels offering the ability to be made highly available.

Smart devices and edge computing have proven ability to help smart cities advance and problem-solve—but without secure connectivity, these measures fall short. By pairing an SDP client with smart devices, those who are working on creating the hyperconnected smart cities that will take us into the future can safeguard their investment of time, resources, and data as well.