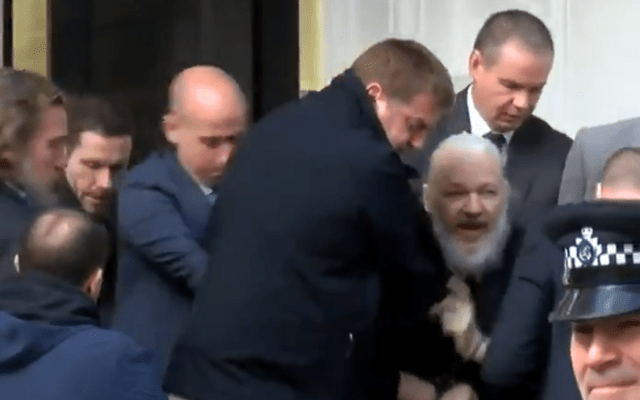 Last week, WikiLeaks founder Julian Assange has been arrested at the Ecuadorian Embassy in London. after Ecuador withdrew asylum after seven years.

In response to the arrest acktivist communities launched several attacks against the Ecuador government.

Yesterday Ecuador confirmed that over 40 million cyber attacks hit the webpages of public institutions since stripping the arrest of Julian Assange.

Patricio Real, Ecuador’s deputy minister for information and communication technologies, revealed that the attacks had “principally come from the United States, Brazil, Holland, Germany, Romania, France, Austria and the United Kingdom,” as well as from the South American country itself.

Assange was arrested at the Ecuadorian Embassy in London after President Lenin Moreno withdrew asylum after seven years.

Moreno officially decided to remove the asylum because of Assange’s interferences in the “processes of other states” and “spying.”

“Moreno accused Assange of interfering in the “processes of other states” and “spying.” reported the AFP agency.

“As well as overturning Assange’s asylum status, Ecuador stripped him of the nationality he was given in 2017 under the government of Moreno’s predecessor Rafael Correa.”

Javier Jara, undersecretary of the electronic government department of the telecommunications ministry, confirmed that groups linked to Julian Assange launched “volumetric attacks” that blocked access to the internet.

Government websites were hit by massive DDoS attacks that isolated them from the Internet, most of the attacks targeted websites of the foreign ministry, the central bank, the president’s office, the internal revenue service, and several ministries and universities.

At the time of publishing there is no news of data breach.

How To Protect Against The 83 million Cyber Attacks Detected In 2021 REvil ransomware gang hacked Acer and is demanding a $50 million ransom New Report Shows Over Two Million Secrets Detected on Public GitHub in 2020 and a 20% growing trend Year-Over-Year. New LinkedIn breach exposes data of 700 Million users T-Mobile data breach could be worse than initially thought, 54 million customers impacted Pink Botnet infected over 1.6 Million Devices, it is one of the largest botnet ever seen Android.Cynos.7.origin trojan infected +9 million Android devices Why ‘Thinking Small’ Is the Way to Stop Ransomware and Other Cyber Attacks
April 18, 2019