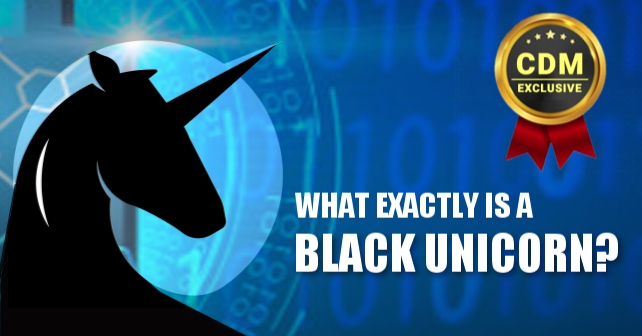 What is a Black Unicorn?

In the venture capital industry, a unicorn refers to any tech startup company that reaches a $1 billion dollar market value as determined by private or public investment. The term was originally coined in 2013 by venture capitalist Aileen Lee, choosing the mythical animal to represent the statistical rarity of such successful ventures. Last year, CB Insights reported that the odds of becoming a unicorn — a company valued at $1 billion or more — was less than 1% for companies that had raised venture capital. In 2018, there were 47 tech companies in the US to reach this unicorn status, according to data provided by PitchBook. (Source: Wikipedia)

I believe as we fight the good fight and keep the ‘blackhats’ off our networks, we will see tremendous value in those that deliver on this promise – the black unicorns.

Therefore, I have coined the term Black Unicorn as a cyber-security company that has the potential to reach a $1 billion dollar market value as determined by private or public investment.

Remember, in the following recent IPOs, each of these cyber-security companies made it at or above the “Black Unicorn” $1B valuation mark – Zscaler, Okta, Forescout and Sailpoint. (Source:  Momentum Cyber).

At Cyber Defense Magazine we’re tracking just over 3,000 cyber-security companies around the globe, broken down into nearly 100 categories (from anti-phishing to zero-trust).  Of these 3,000 companies, I expect we’ll see just less than a dozen in the next twelve months even have the potential for Black Unicorn status.  When they do, we’ll let you know.

Gary Miliefsky, Founder & CEO of Cyber Defense Media Group (CDMG) is an internationally recognized cybersecurity expert, bestselling author and keynote speaker. He is a Founding Member of the US Department of Homeland Security, the National Information Security Group and the OVAL advisory board of MITRE responsible for the CVE Program. He also assisted the National Infrastructure Advisory Council (NIAC), which operates within the U.S. Department of Homeland Security, in their development of The National Strategy to Secure Cyberspace as well as the Center for the Study of Counter-Terrorism and Cyber Crime at Norwich University. Gary has been founder and/or inventor for technologies and corporations sold and licensed to Hexis Cyber, WatchGuard, Intel/McAfee, IBM, Computer Associates and BlackBox Corporation. Gary is a member of ISC2.org and is a CISSP®.

In 2012, he founded Cyber Defense Magazine, which has grown to a market leader on sharing information on all things cybersecurity, as independently reviewed, daily, here: https://essentials.news/en/future-of-hacking having over 1.4m readers and continuing to grow, every day. Other CDMG platforms he’s launched include CyberDefenseTV, CyberDefenseRadio, CyberDefenseAwards with additional platforms launching in 2019.

He is a frequent invited guest on national and international media commenting on breaches, cyber crime, internet of things, cloud computing, digital transformation, artificial intelligence, privacy, cyber security, and cyber terrorism. He has also been covered in Forbes, Fortune and Inc. Magazines. He is also an expert on Cryptocurrencies and related fraud as well as most issues pertaining to ICOs, Bitcoins, Blockchain technology and Ransomware. His recent bestselling book, rated 5.0 stars, is entitled Cryptoconomy – Bitcoins, Blockchains and Badguys, available on Amazon.com.  He’s frequently writing articles published throughout the mainstream media and he also likes to write thought provoking articles at LinkedIn as a Top 1% of all INFOSEC LinkedIn profiles and a Top 3% Globally on LinkedIn.