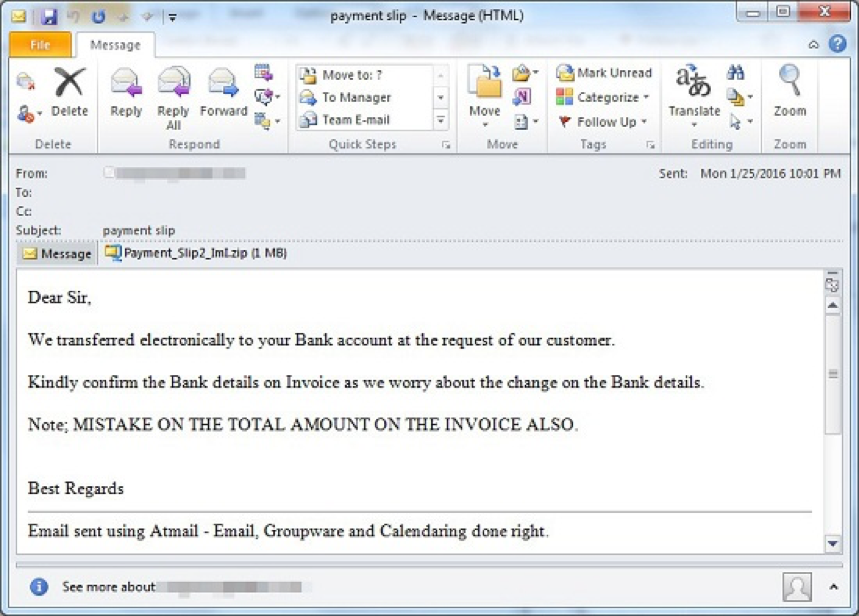 According to a report recently issued by the FBI, cyber criminals have pilfered more than $2.3bn from 17,642 victims since 2013 with BEC attacks.

The situation is critical, the number of business email compromise BEC scams continues to increase on a global scale.

“The Business Email Compromise (BEC) is a sophisticated scam targeting businesses working with foreign suppliers and/or businesses that regularly perform wire transfer payments. Formerly known as the Man-in-the-E-mail Scam, the BEC was renamed to focus on the “business angle” of this scam and to avoid confusion with another unrelated scam.” reports the statement issued in 2015 by Internet Crime Complaint Center (IC3) and the FBI.

Scammers use to pretend to be executives that send emails to employees that tricked into thinking the messages are legit, hand over sensitive information to the attackers.

The attackers use the stolen data to steal money to the victims or resell them in the cyber criminal underground.

“FBI officials are warning potential victims of a dramatic rise in the business e-mail compromise scam or “B.E.C.,” a scheme that targets businesses and has resulted in massive financial losses in Phoenix and other cities.” states the new alert issued by the FBI.

Attackers focus their attack on all the internal staff that in charge to manage bank accounts and can make wire transfers. Businesses that work with foreign suppliers or that regularly perform wire transfer payments are a privileged target for scammers.

“The schemers go to great lengths to spoof company e-mail or use social engineering to assume the identity of the CEO, a company attorney, or trusted vendor. They research employees who manage money and use language specific to the company they are targeting, then they request a wire fraud transfer using dollar amounts that lend legitimacy.”

According to the FBI, since January 2015, there was a 270 per cent rise in BEC attacks against victims in every U.S. state and in at least 79 countries.

A number of illustrious victims suffered BEC scams, In January 2015 crooks stole over $50 million from aircraft systems manufacturer FACC, in March 2016 data belonging to all current and past Seagate employees were stolen due to a W-2 phishing campaign.

The FBI warned companies to improve authentication mechanisms for their services, for example, by adopting multi-factor authentication processes. It is essential to train employees in the BEC attack techniques in order to avoid being victims of scammers.